John William Bower (born John William Kiszkan; November 8, 1924 – December 26, 2017), nicknamed "The China Wall", was a Canadian Hockey Hall of Fame goaltender who won four Stanley Cups during his career with the Toronto Maple Leafs. On January 1, 2017, in a ceremony prior to the Centennial Classic, he was named one of the "100 Greatest NHL Players" in history.

Bower was born John William Kiszkan into a Ukrainian Canadian family in Prince Albert, Saskatchewan. He taught himself how to play hockey, using a branch as a stick, and made himself goalie pads out of old mattresses.

When he was 15, he lied about his age and enlisted in the Canadian Army during World War II; from 1940 to 1943 he was stationed in England as a gunner with the 2nd Canadian Division. He was discharged due to rheumatoid arthritis in his hands.

Kiszkan returned to Prince Albert in 1944 to play junior hockey there. In 1945, he turned professional in the American Hockey League (AHL), where he spent eleven seasons playing mostly for the Cleveland Barons in the late 1940s and 1950s.

Bower made his debut in the National Hockey League (NHL) with the New York Rangers in 1953, at the age of 29. The Rangers made him their starting goaltender. Bower played in all 70 games that season and recorded 29 wins. The following season Bower returned to the minor leagues. He played there for four more years with three teams, the Providence Reds, the Vancouver Canucks and the Cleveland Barons, and was called up briefly by the Rangers in 1954 and 1956. 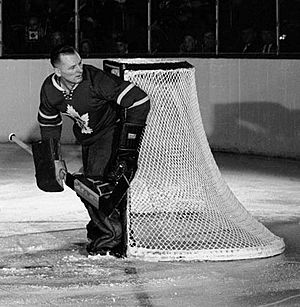 In the 1958 Inter-League Draft he was claimed by the Toronto Maple Leafs. Punch Imlach, visited Bower and convinced him to give the NHL one more try, as he considered him "the most remarkable — and maybe the best — athlete in the world."

Bower won his first Vezina Trophy in 1961 for allowing the fewest goals in the 1960-61 season. The height of his NHL career came during the Maple Leafs' three consecutive Stanley Cup victories from 1962 to 1964. He later said, "When we won the Stanley Cup, my head went numb, my whole body went numb. That was my dream from Day One. You just can't explain the feelings inside you." Bower's career was hampered by poor eyesight, but he remained a top-tier goaltender. He was known for his hard-nosed, scrappy playing style and helped the Leafs win another Stanley Cup in 1967.

On April 6, 1969, at the age of 44 years, 4 months, and 29 days, Bower became the oldest goaltender to play in a Stanley Cup playoff game. He played his last game on December 10, 1969. At the time, he was the oldest full-time player ever to participate in an NHL game.

On March 19, 1970, Bower publicly announced his retirement, four months after his 45th birthday. He played eleven full seasons with the Leafs. When asked if he might reveal his true age, he replied "If you don't know by now, you never will". Coach Punch Imlach once told Bower, after seeing a purported birth certificate, “If you were born in this day here that you’re telling me, you had to be overseas with the First Division, in 1939, when you were 13." Bower eventually revealed his birth date as November 8, 1924.

He remains the AHL career leader in wins with 250. 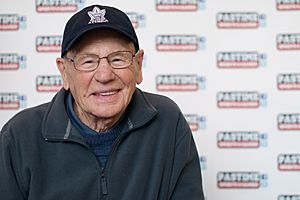 Johnny Bower attends an autograph signing in Surrey, B.C. in 2013

Bower worked for the Maple Leafs after his retirement in various capacities, including as a scout and a goalie coach. He was assistant coach for the Leafs from 1976 to 1978. He retired in 1990, but continued to make public appearances on behalf of the organization for the rest of his life.

In January 2004, Bower was featured on a postage stamp. As part of the NHL All-Stars Collection, he was immortalized along with five other All-Stars. In 2005, the Royal Canadian Mint featured Bower on a non-circulating fifty-cent coin, as part of its four-coin Legends of the Toronto Maple Leafs coin set. In 2007, it was announced that Bower would receive a star on Canada's Walk of Fame.

On May 24, 2014, Bower attended a street renaming ceremony in Weston in Toronto. Patika Avenue, where he lived during the 1960s, was renamed Johnny Bower Boulevard.

On December 26, 2017, Bower died at the age of 93 from pneumonia. In the days following Bower's death, many teams, including the Maple Leafs, Winnipeg Jets, Arizona Coyotes and Toronto Raptors of the National Basketball Association honoured Bower with pre-game tributes. On January 3, the Maple Leafs hosted a public celebration of Bower's life at the Air Canada Centre. The event was attended by thousands, including various NHL alumni, members of the current Maple Leafs team and other major figures. The memorial was televised across several channels in Canada, and in accordance with the event, Toronto Mayor John Tory declared January 3 to be Johnny Bower Day in the city of Toronto. For the remainder of the 2017 season, the Maple Leafs wore patches on their jerseys and helmets in honour of Bower.

Bower was the first goaltender to employ the poke check, an aggressive move whereby the goalie uses his stick to poke the puck away from an attacking player, sometimes leaving his crease to do so. This move has since been imitated by goaltenders at all levels of hockey. 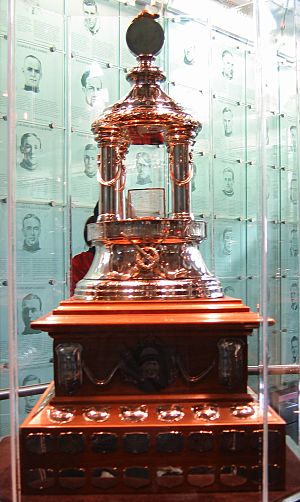 All content from Kiddle encyclopedia articles (including the article images and facts) can be freely used under Attribution-ShareAlike license, unless stated otherwise. Cite this article:
Johnny Bower Facts for Kids. Kiddle Encyclopedia.