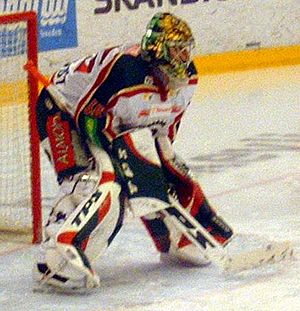 Henrik Lundqvist ( born 2 March 1982, in Åre, Sweden) is a Swedish ice hockey goaltender for the New York Rangers of the National Hockey League (NHL). He has been nominated for the Vezina Trophy three times. He finished third all three times. His play during his first season resulted in the New York media and Rangers fans giving him the nickname "King Henrik". During the 2006 Winter Olympics in Torino, Italy, he played on the Swedish team when they won their second Olympic Gold Medal.

All content from Kiddle encyclopedia articles (including the article images and facts) can be freely used under Attribution-ShareAlike license, unless stated otherwise. Cite this article:
Henrik Lundqvist Facts for Kids. Kiddle Encyclopedia.