Theodore played major junior in the Quebec Major Junior Hockey League (QMJHL), where he won a President's Cup as QMJHL champions and competed in the Memorial Cup with the Hull Olympiques in 1995. He won both the Ford Cup as the top defensive player and Guy Lafleur Trophy as playoff MVP in 1995 and is a two-time QMJHL Second Team All-Star.

Drafted 44th overall by the Canadians in 1994, Theodore played eight seasons in Montreal, where he won the Vezina and Hart trophies, both in 2002. In 2006, he was traded to the Colorado Avalanche, where he played two full seasons. Theodore also played two seasons for the Washington Capitals. 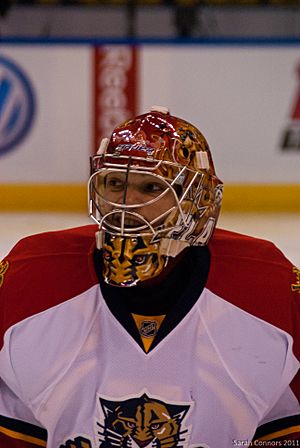 All content from Kiddle encyclopedia articles (including the article images and facts) can be freely used under Attribution-ShareAlike license, unless stated otherwise. Cite this article:
José Théodore Facts for Kids. Kiddle Encyclopedia.