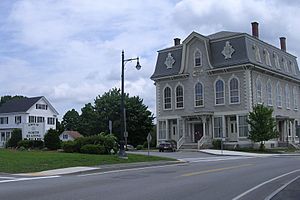 North Reading is a town in Middlesex County, Massachusetts, United States. The population was 14,892 at the 2010 census.

The area was first settled in 1651 when the town of Reading received a special land grant north of the Ipswich River. It was officially incorporated as the separate town of North Reading in 1853. North Reading borders Andover, North Andover, Middleton, Lynnfield, Reading, and Wilmington.

"Original grants of large farmsteads along the river during the mid-17th century brought six families to the settlement before 1680. The economy of the town in the 17th and 18th century was based on subsistence farming with limited hop production. There was a sawmill on Lob's Pond by 1694 and grist and saw mills at the village center by 1794. Some small scale boot and shoe making was underway by 1820, and by 1850 small sheds or shops to make shoes were attached to almost every house in town. These shops produced cheap footwear that was sold south to clothe slaves, and the Civil War destroyed the town's industry. The principal products of the town in the early 20th century were milk, apples and fruits."

Today the town flourishes; it has a beautiful town center showcased by a recently completed state of the art High School, historic buildings still standing, and proximity to Boston which makes it a desired location for suburban families.

There were 4,795 households out of which 40.0% had children under the age of 18 living with them, 68.9% were married couples living together, 7.0% had a female householder with no husband present, and 21.7% were non-families. 17.9% of all households were made up of individuals and 6.1% had someone living alone who was 65 years of age or older. The average household size was 2.86 and the average family size was 3.28.

All content from Kiddle encyclopedia articles (including the article images and facts) can be freely used under Attribution-ShareAlike license, unless stated otherwise. Cite this article:
North Reading, Massachusetts Facts for Kids. Kiddle Encyclopedia.