Lynnfield is a town in Essex County, Massachusetts, in the United States. At the 2010 census, the town population was 11,596.

Lynnfield initially consisted of two separate villages with a single governing body. Lynnfield Center comprises mostly an agricultural population, while South Lynnfield boasted a mixed culture. Together, the two towns evolved into one of the most prosperous suburbs in the North Shore region of Massachusetts. 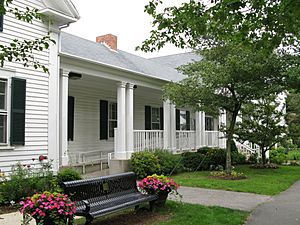 The town of Lynnfield was first settled in 1638 and was made a district separate from Lynn in 1782. It was later officially incorporated in 1814. Historically, Lynnfield functioned as two separate villages connected by one governing body: in Lynnfield Center resided a mostly agricultural population, while South Lynnfield was a crossroad situated amongst neighboring larger towns. During this time, the town had two inns, a granite rock quarry, a small carbonated beverage bottler, and various eating institutions.

The stagecoach line north from Boston to Portsmouth, New Hampshire, known locally as the "Newburyport Turnpike", ran through South Lynnfield. Later this roadway became U.S. Route 1, the route which brought many people north to the small town during the post-World War Two population surge. Lynnfield had attractions such as horse shows and ballroom dancing. Lynnfield has since become a modern, chiefly residential suburb of Boston.

Along with the communities of Chelsea, Lynn, Salem, Marblehead, Danvers, Middleton, Andover, Methuen, Haverhill, Amesbury and Salisbury, Lynnfield was a part of "The Gerry-mander" so described by the Boston Gazette on March 26, 1812.

Interstate 95 and Route 128 pass concurrently through town twice, becoming separate just over the Peabody line. U.S. Route 1 and Massachusetts Route 129 also enter the town concurrently, separating in the southeast corner of town, at the Lynnfield Tunnel, a local traffic landmark. There are no other state or national routes passing through town. The Springfield Terminal railroad passes through town, but is no longer in service. There is no commuter rail service within town; the nearest service can be found on the Haverhill/Reading Line of the MBTA Commuter Rail just west of town. The nearest airport is Beverly Municipal Airport to the east; the nearest national and international air service can be found at Boston's Logan International Airport.

There were 4,179 households out of which 35.2% had children under the age of 18 living with them, 68.5% were married couples living together, 7.1% had a female householder with no husband present, 2.5% a male householder with no wife present, and 21.8% were non-families. 18.8% of all households were made up of individuals and 11.6% had someone living alone who was 65 years of age or older. The average household size was 2.77 and the average family size was 3.20.

All content from Kiddle encyclopedia articles (including the article images and facts) can be freely used under Attribution-ShareAlike license, unless stated otherwise. Cite this article:
Lynnfield, Massachusetts Facts for Kids. Kiddle Encyclopedia.