Wakefield is a town in Middlesex County, Massachusetts in the Greater Boston metropolitan area, incorporated in 1812 and located about 12.5 mi (20.1 km) north-northwest of Downtown Boston. The 73rd most populous municipality in Massachusetts, Wakefield's population was 24,932 at the 2010 census.

Wakefield was first settled in 1638 and was originally known as Lynn Village. It officially separated from Lynn and incorporated as Reading in 1644 when the first church (First Parish Congregational Church) and the first mill were established. This first corn mill was built on the Mill River on Water Street, and later small saw mills were built on the Mill River and the Saugus River.

The Rattan Works (which made wicker furniture) was established in 1856 by Cyrus Wakefield. This later grew into the Wakefield Rattan Company and at one time had a thousand employees. In 1868 Cyrus Wakefield donated land and money for a new town hall, and in thanks the town voted to change its name from South Reading to Wakefield. The town hall, currently named for William J. Lee, is located at 1 Lafayette Street.

The first weekly newspaper in Wakefield was established in 1858.

One of the oldest and largest manufacturers of flying model airplane toys in the world, Paul K. Guillow, Inc. is located in Wakefield. The company is particularly notable for its extensive line of balsa wood model airplane kits.

Route 128 was built along the north edge of the town by 1958, and the American Mutual Insurance Company built its headquarters between Lake Quannapowitt and Route 128. American Mutual had over 1000 employees, most of them commuting to work via Route 128. By the late 1980s American Mutual was in liquidation due to the Woburn W. R. Grace litigation. The headquarters building was sold to the Beal Company and was home to Boston Technology Inc. which invented and manufactured corporate voice mail systems that operated on computer systems. Boston Technology merged in 1997 with Comverse Technology, a digital telecommunications equipment manufacturer, which later bought the building; Wakefield became headquarters of its eventual spinoff, Comverse.

The northeastern part of Wakefield was home to an amusement park, Pleasure Island, billed as "The Disneyland of the Northeast," but the park closed in 1969 after only ten years of operation due to unseasonably cold weather that brought diminishing returns among tourists. In April 1971, a fire burned down much of the amusement park. The area now consists of several office buildings and is called "Edgewater Park".

The bicentennial of the incorporation of Wakefield took place in 2012.

Route 129 runs through Wakefield as its Main Street. I-95 and Route 128 skirt the northwestern border of Wakefield as one road known as the "Yankee Division Highway". 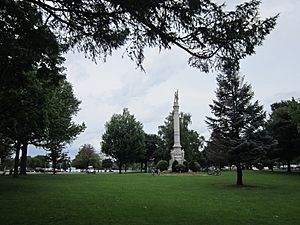 Wakefield has two lakes, Crystal Lake and Lake Quannapowitt. Crystal Lake is used as a reservoir for some of the town's drinking water. Lake Quannapowitt is used for a wide variety of recreational activities, including boating, windsurfing and fishing, and is the primary source of the Saugus River.

In 1847, Lake Quannapowitt was named for the Native American James Quannapowitt, one of the signers of the old Indian Deed of 1686. The earliest settlers referred to the lake simply as the "Greate Pond" or "Reading Pond."

Lake Quannapowitt is also home to the oldest inland yacht club in the United States, Quannapowitt Yacht Club, which was founded in 1886.

Long regarded as "Wakefield's greatest natural resource," Lake Quannapowitt covers an area of 247 acres (1.00 km2). Its outlet is the Saugus River to the Atlantic Ocean. Wakefield Common sits to the south of the lake, and is the site of many recreational activities and events throughout the year. In 1991, a group of local citizens formed "The Friends of Lake Quannapowitt" to advocate for the lake and to educate the public about this natural resource. The group has also raised money for projects that benefit the lake and the surrounding areas.

Wakefield harbors a climate typical to the Northeastern United States, with cold, snowy winters, cool, rainy springs, cool, sunny autumns, and hot, humid summers. The town received, along with many other parts of Massachusetts, 2 to 3 feet (0.61 to 0.91 m) of snow during a January 2011 Nor'Easter. Wakefield also received 27.5 inches (700 mm) or 2.29 feet (0.70 m) of snow during the February 2013 Nor'Easter known as Winter Storm Nemo, and snowfall in Wakefield was unofficially reported as 29.0 inches (740 mm) or 2.42 feet (0.74 m) following the January 2015 Nor'Easter known as Winter Storm Juno.

The average household size was 2.47 and the average family size was 3.07.

In the Town in 2010, the population was spread out agewise with:

The median resident age was 38.9 years, compared to the Massachusetts median age of 36.5.

Racially, Wakefield broke down as:

Ancestries in Wakefield broke down thus

Hispanic or Latino of any race were 0.82% of the population.

There were 9,747 households out of which 30.2% had children under the age of 18 living with them, 55.1% were married couples living together, 9.7% had a female householder with no husband present, and 32.2% were non-families. 26.4% of all households were made up of individuals and 10.6% had someone living alone who was 65 years of age or older. The average household size was 2.52 and the average family size was 3.09.

See the top of the page for additional photos.

Wakefield is roughly composed of the following neighborhoods: 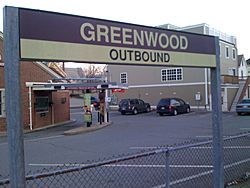 This commuter rail station in Wakefield bears the name of Greenwood, one of its neighborhoods.

An MBTA Commuter Rail station on the Haverhill/Reading Line is located near the center of town as well as a second station in the Greenwood section. A former Boston and Maine Railroad station located east of this line is now on the National Register of Historic Places. Several MBTA buses on Route 136 and Route 137 run to surrounding communities, including the nearby Oak Grove stop as well as Malden Center, both rapid transit stations on the Orange Line. The route 428 bus from Oaklandvale in nearby Saugus to Haymarket in downtown Boston stops on Farm Street in front of Wakefield High School; this bus route runs express to Haymarket. Rt. 128/I-95 runs through Wakefield with exits at Albion Street, North Avenue, Water Street, Vernon Street, New Salem Street, and Salem Street. State Route 129 also passes through Wakefield. US Route 1 runs through nearby Saugus and Lynnfield, while I-93 runs through neighboring Stoneham.

All content from Kiddle encyclopedia articles (including the article images and facts) can be freely used under Attribution-ShareAlike license, unless stated otherwise. Cite this article:
Wakefield, Massachusetts Facts for Kids. Kiddle Encyclopedia.