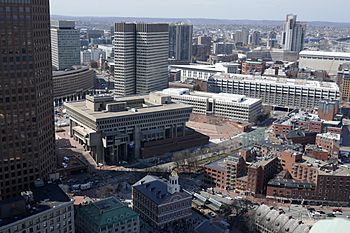 View of Government Center from the Custom House Tower

Government Center is an area in downtown Boston, centered on City Hall Plaza. Formerly the site of Scollay Square, it is now the location of Boston City Hall, courthouses, state and federal office buildings, and a major MBTA station. 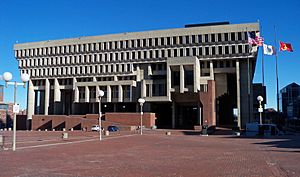 The dominant feature of Government Center is the enormous, imposing, and brutalist Boston City Hall, designed by Kallmann McKinnell Woods and built in the 1960s as part of Boston's first large Urban Renewal scheme. While considered by some to have architectural merit, the building is not universally admired, and is sharply unpopular among locals. Furthermore, it is resented for having replaced the Victorian architecture of Boston's Scollay Square, a lively commercial district that lapsed into squalor in the Twentieth Century.

John Fitzgerald Kennedy Federal Building is a United States government office building. It is located across City Hall Plaza from Boston City Hall. An example of 1960s modern architecture, it consists of two 26 floor towers that sit on-axis to each other and a low rise building of four floors that connects to the two towers via an enclosed glass corridor. The two towers stand at a height of 118 metres (387 ft). 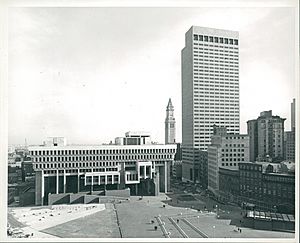 City Hall Plaza is not a well-loved space, either. As Bill Wasik wrote in 2006, "It is as if the space were calibrated to render futile any gathering, large or small, attempted anywhere on its arid expanse. All the nearby buildings seem to be facing away, making the plaza's 11 acres (45,000 m2) of concrete and brick feel like the world's largest back alley. … [It is] so devoid of benches, greenery, and other signposts of human hospitality that even on the loveliest fall weekend, when the Common and Esplanade and other public spaces teem with Bostonians at leisure, the plaza stands utterly empty save for the occasional skateboarder…" The plaza is often colloquially referred to as "the brick desert."

Another very large Brutalist building at Government Center, less prominently located and thus less well known than City Hall, is the Government Service Center, designed by architect Paul Rudolph. The building is unfinished as the tall central tower in the original plan was never built. In the mid-1990s, the adjacent space was filled with the Edward W. Brooke Courthouse, which houses a division of the Boston Municipal Court. This irregularly shaped, sloping lot was the last parcel to be developed of the Government Center urban renewal plan; in the interim the space was used as surface parking. In a 2014 article, architectural historian Timothy M. Rohan praised the building for having "a wondrous interior courtyard like something from baroque Rome, a space that even in its incomplete and neglected state contrasts sharply with nearby City Hall and its alienating plaza."

This 2,300-space privately owned garage was built as part of the Government Center urban renewal project. In 2016, the Boston Redevelopment Authority gave final approval for the replacement of the garage with "Bulfinch Crossing," a 2.9 million square foot mixed-use development to be designed by Pelli Clarke Pelli Architects. Construction began in January 2017. 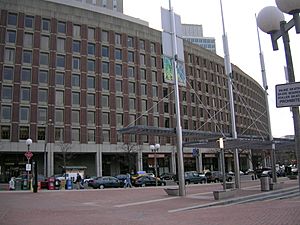 This 720,000 square foot office and retail structure, built by developer Norman B. Leventhal, is across Cambridge Street from City Hall Plaza. In 2014, the property was sold by the Blackstone Group to Shorenstein. Shorenstein has proposed a $25 million renovation designed "to add some new buzz" to the building. The renovation was approved by the Boston Redevelopment Authority in 2016.

Several state and federal government buildings near Government Center were not built as part of the urban renewal project. These include the Massachusetts State House, the McCormack Building, the Saltonstall Building, the Suffolk County Courthouse, and the Thomas P. O'Neill Jr. Federal Building. Some of these buildings are considered, in Wikipedia listings and other sources, to be located in Government Center.

Government Center is located between the North End and Beacon Hill neighborhoods.

Other maps and documents show a variety of different boundaries for Government Center. The Boston Zoning Code has a map called "1H Government Center/Markets District." The map shows the Government Center portion of the district extending as far west as the Massachusetts State House and including all of the major structures listed in this article. The Boston Redevelopment Authority map of "Urban Renewal Areas" includes a somewhat smaller area that excludes the McCormack and Saltonstall Buildings.

By contrast, a search for "Government Center" on Google Maps yields a map showing an even smaller area that is bounded by Court, Cambridge, Sudbury, and Congress Streets. The AirBnB neighborhood map shows a somewhat larger area than the Google Map. 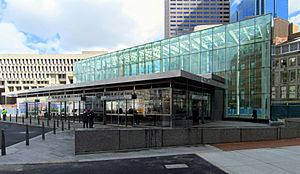 Scollay Square station opened as part of the third phase of the Tremont Street Subway in September 1898, bringing subway service to the area with a stone headhouse in the center of the square. Court Street station opened on the East Boston Tunnel in December 1904; it was closed in 1914 and replaced by a lower level (Scollay Under) to the Scollay Square station in 1916. The station was rebuilt in 1963 as Government Center station with a low brick headhouse, and again from 2014-2016 with a large glass headhouse that dominates the south side of the plaza. It serves as the transfer point between the MBTA's Blue and Green Lines.

Government Center is adjacent to historic Faneuil Hall and popular Quincy Market and very near the Old State House. It is two blocks away from the Rose Fitzgerald Kennedy Greenway, which was created as part of the Big Dig. Major city streets in the vicinity include Tremont, Congress, Cambridge, State, New Chardon, and Washington Streets. Hints of another street, Cornhill, still exist along one edge of City Hall Plaza. Two of the neighborhood's few remaining old buildings, the Sears' Crescent and Sears' Block, face the plaza and follow the original curve of Cornhill. A veteran's shelter still has an entrance with a Cornhill address.

All content from Kiddle encyclopedia articles (including the article images and facts) can be freely used under Attribution-ShareAlike license, unless stated otherwise. Cite this article:
Government Center, Boston Facts for Kids. Kiddle Encyclopedia.