Nahant is a town in Essex County, Massachusetts, United States. The population was 3,334 at the 2020 census, which makes it the smallest municipality by population in Essex County. With just 1.0 square mile (2.7 km2) of land area, it is the smallest municipality by area in the state. It is primarily a residential community. The town is situated on peninsula consisting of two near-islands (known as "Little Nahant" and "Nahant" respectively) connected to the mainland by a narrow sandy isthmus traversed by a single causeway known as "Nahant Road". Numerous tourist beaches line the shores, with the most popular being the so-called "Long Beach" and "Short Beach" along the eastern side of the causeway.

Native Americans called the area Nahant, meaning "the point" or "almost an island." The original Indian name of the place, Nahanten, signifies twins or two things united, referring to the two connected islands forming it. Located on a tied island jutting into Massachusetts Bay, it was first settled in 1630, in the second year of the Puritan coming. The servants of Isaac Johnson grazed his cattle on the land, and it was also often used by citizens of Lynn for grazing cattle, sheep and goats. Before 1800 there were only three homes on the island: those built by the Breeds and the Hoods, and the Johnson home built by Jeremiah Gray. The first hotel was built by one of the Johnsons 1802, and in 1817 a steamboat ran daily between Boston and Nahant. The town was originally part of Lynn; when the temperance movement threatened the summer resort trade in 1853, Nahant incorporated as a separate town. In the late 19th century, it was home to some of the country's first amusement parks, as well as a popular summer retreat for the wealthy, including the poet Henry Wadsworth Longfellow. The geologist Louis Agassiz was a resident and the artist William Stanley Haseltine produced many versions of his oil painting 'The Rocks at Nahant'. During World War II, East Point was the site of a coastal artillery. It is now a town park, and location of the Marine Science Center for Northeastern University. 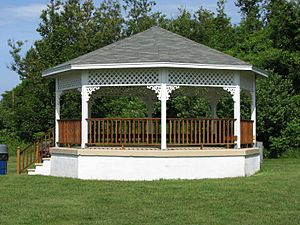 The old Nahant Life Saving Station (NLSS) on Nahant Road and the new War Memorial erected across the street from the NLSS were renovated in 2004.

In 2003, the dilapidated Valley Road School was refurbished and re-commissioned as the Nahant Community Center, which is now home to many local activities and banquets, including the local Boy Scout Troop 50.

On September 25, 2005, the Town of Nahant officially commemorated the completely rebuilt Bailey's Hill Gazebo as the Calantha Sears Gazebo. The original was built for the bicentennial in 1976, and over the years had fallen into disrepair. With funding from the Woman's Club of Nahant and collaboration with the town of Nahant, local residents contributed to its reconstruction. Besides the cement base, the only remaining piece of the original is the wooden cylinder in the center of the roof, which still bears the "1976" emblem – repainted by Nahant local Octavia Randolph.

According to the United States Census Bureau, the town has a total area of 15.5 square miles (40.1 km2), of which 1.0 square mile (2.7 km2) is land and 14.4 square miles (37.4 km2), or 93.24%, is water. Nahant is a tied island connected to the mainland by a natural tombolo, effectively a peninsula though often referred to as an "island". Nahant is connected by a causeway to the city of Lynn. The town is surrounded by Nahant Bay to the east, Nahant Harbor to the south, and Lynn Harbor to the west, all of which lead directly into Broad Sound and Massachusetts Bay. The town is essentially divided into a main portion and Little Nahant, just north of the main portion of town along the eastern side of the causeway. The area along the west side of town, between Black Rock Point and Bass Point, is the most densely settled part of town. There are ten beaches along the coastline, the largest being Nahant Beach and Long Beach, both of which line the eastern side of the causeway road north of Little Nahant. The town also has a few small parks and the Kelly Greens Golf Course.

Nahant is just one of four towns out of the 351 cities and towns in Massachusetts (along with Rockport, Provincetown and Aquinnah) that only touches one other town by land (Gosnold and Nantucket do not touch any). Only touching a 400-yard portion of Lynn by land, the water rights of the town also touch those of Revere, Winthrop and Boston, in Suffolk County. Both by land and by sea, Nahant is the southernmost town in Essex County. The town is centered 14 miles (23 km) by land northeast of Boston, 9 miles (14 km) south of Salem, and 25 miles (40 km) southwest of Cape Ann.

The town has no state routes of any kind within town, one of fifteen in Massachusetts that share that distinction. The nearest state route is Route 129, within Lynn. The nearest highways are a highway portion of U.S. Route 1 in Saugus and Interstate 95 and Route 128 in Peabody. The only mass transit within town is route 439 of the MBTA Bus system, which loops within town before passing back into Lynn, providing access to Central Square, home to a stop along the Newburyport/Rockport Line of the MBTA Commuter Rail, providing service between the North Shore and Boston's North Station. The nearest airport to town is Boston's Logan International Airport. 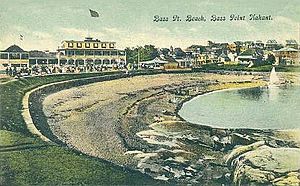 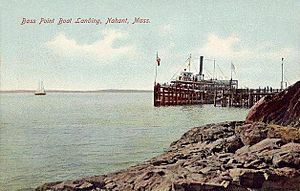 Nahant appears in the 2015 Post Apocalyptic RPG Fallout 4.
The narrator of "Sarah's Key" (a novel by Tatiana de Rosnay) was Miss Nahant in her youth.
Actor Jason Mantzoukas is from Nahant.
Actress Barbra Fuller is from Nahant.

Nahant does not have a middle or high school. Students attend grades preschool through sixth at Johnson Elementary School in Nahant. For grades seven through twelve, students attend schools in nearby Swampscott.

All content from Kiddle encyclopedia articles (including the article images and facts) can be freely used under Attribution-ShareAlike license, unless stated otherwise. Cite this article:
Nahant, Massachusetts Facts for Kids. Kiddle Encyclopedia.