Castle Hill refers to either a 165-acre (67 ha) drumlin surrounded by sea and salt marsh or to the mansion that sits on the hill. Both are part of the 2,100-acre (850 ha) Crane Estate located on Argilla Road in Ipswich, Massachusetts. The former summer home of Mr. and Mrs. Richard T. Crane, Jr., the estate includes a historic mansion, 21 outbuildings, and designed landscapes overlooking Ipswich Bay, on the seacoast off Route 1, north of Boston. Its name derives from a promontory in Ipswich, Suffolk, England, whence many early Massachusetts Bay Colony settlers immigrated, and predates the Crane mansion.

The estate is a relatively intact work from the Country Place Era of the turn of the 20th century, when wealthy families built extensive country estates. The Crane Estate includes architectural and landscape designs from at least seven firms or individuals of national reputation, including the Olmsted Brothers and Shepley, Rutan and Coolidge, and is extensively documented. In recognition for its state of preservation and design, it was designated a National Historic Landmark in 1998. The property is now owned by The Trustees of Reservations and is open to the public.

Its history dates back as far as December 29, 1634, when a group of Ipswich town selectmen unanimously voted "That the Neck of Land wheareuppon the great Hill standeth, which is known by the name of the Castle Hill, lyeinge on the other side of this River towards the Sea, shall remayne unto the common use of the Towne forever."

In June 1637, John Winthrop, Jr., the town's founder and son of Governor John Winthrop, threatened to leave Ipswich, and Castle Hill was deeded to him as an enticement to stay. In 1644, he deeded Castle Hill to Samuel Symonds, Deputy Governor, who in turn deeded it to his son-in-law, Daniel Epps, in 1660. By 1745, it belonged to the Brown family. After John Burnham Brown died, the property was purchased by Richard Teller Crane, Jr., on January 10, 1910. Crane was the president of the Crane Co. of Chicago, which he inherited from his father, Richard Teller Crane, who founded the company in 1855.

It was declared a National Historic Landmark in 1998. 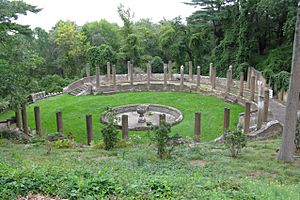 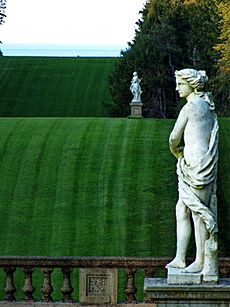 The "Grande Allée" after restoration, 2011

Crane hired the famous Olmsted Brothers, sons of Frederick Law Olmsted (creator of New York's Central Park, Brooklyn's Prospect Park, Boston's Emerald Necklace and others), to design the landscaping. By 1912, they had fashioned a series of ornate terraced gardens, with a magnificent grass mall, 160 feet (49 m) wide and lined with evergreens cascading from the top of the hill straight down to the water nearly half a mile away. Classical-style statuary flank this "Grande Allée" at regular intervals. An opulent "casino" was built at its midpoint, replete with saltwater swimming pool, bathhouse, guest cabanas and a sizable indoor ballroom. Two main gardens, the "Italian Garden" and the "Rose Garden," once contained ornate plantings, landscaped walkways and Italianesque fountains.

Atop Castle Hill, Crane built an Italian Renaissance-style villa, with stucco walls and red tiled roof. Designed by Shepley, Rutan and Coolidge of Boston, the edifice was set upon the highest promontory overlooking the Atlantic Ocean. His wife Florence, however, felt that the mansion was cold and drafty, and made her displeasure known. Crane countered by promising that if she would give it ten years, he would replace it if she still insisted.

"Upon the summit Mr. Crane has erected his splendid summer home, with a beautiful sunken garden, rose garden, lawns and terraces, commanding a marvelous view of land and sea, of Agamenticus and Boar's Head and the low-lying Isles of Shoals on the distant horizon, Bar Island and the long bar with its many lines of white breakers, sand dunes and the level beach near at hand. Mr. Crane has purchased as well, Wigwam Hill and the great tract of picturesque dunes, the old Castle Neck, with the exception of the small tract owned by the United States, on which the light house was built in 1837. He has acquired also the Sagamore Hill farm." (Thomas Franklin Waters, Ipswich in the Massachusetts Bay Colony, Vol. 2, 1917.)

In 1924 the Italianesque mansion was torn down, as promised, and a new mansion soon took its place. Designed by architect David Adler of Chicago, the new fifty-nine-room mansion included a main facade designed in the 17th-century Stuart style, a library with Grinling Gibbons carvings imported from Cassiobury House, an English country house, parquet flooring, and paneled interior rooms from an 18th-century townhouse at 75 Dean Street, London. Completed in 1928, this splendid mansion still stands, and the Olmsted Brothers' landscaping also remains largely unchanged. A pair of immense seated griffin statues by renowned sculptor Paul Manship grace the entrance to the north terrace overlooking the sea. These were a gift from employees of Crane Co. to Mr. Crane in 1928, upon completion of his new home.

After the death of Richard Crane, the estate passed to his wife Florence. In 1945, the Crane family donated much of their private beach and dunes to The Trustees of Reservations, a private, non-profit land conservation and historic preservation organization, with 112 properties throughout the Commonwealth of Massachusetts. When Florence Crane died in 1949, the rest of the property, including the mansion, was given to The Trustees, who maintain the property to this day, and offer tours of the historic mansion seasonally.

The property was used as a forum for outdoor concerts in the late 1950s and early 1960s, featuring such jazz legends as Louis Armstrong, Ella Fitzgerald and Dave Brubeck, and as part of a Castle Hill Art Center and music camp run by the New England Conservatory. Laid out just above the casino and pool, the stage faced the "Great House" so that audiences could sit on the splendid lawn of the Grande Allée, facing the ocean. The Trustees still offer a number of public programs throughout the year, including outdoor picnic concerts on the Alleè, and Christmas events. All part of the Crane Estate, Castle Hill's once-private beaches are now open to the public as Crane Beach.

The 1987 movie The Witches of Eastwick prominently features the grounds and mansion at Castle Hill, the site filmed on location as home of the eccentric millionaire Daryl Van Horne, played by Jack Nicholson.

The 1987 movie Flowers in the Attic also features Castle Hill. It is the main location at which nearly all scenes were filmed.The beginning scene shows the children walking towards the front of the house after being dropped off by the bus. In reality the bus stop is at the end of the rolling green where the lawn ends and the ocean begins.

The 2009 movie Ghosts of Girlfriends Past was predominantly filmed inside and outside the castle. Several fake windows, statues, and columns were added to the building, in addition to a circular driveway added to the front. These fiberglass additions have now been removed, along with the circle driveway.

Phil Keoghan opened the first episode and introduced the video background segments of the contestants of The Amazing Race 17 from the grass mall.

All content from Kiddle encyclopedia articles (including the article images and facts) can be freely used under Attribution-ShareAlike license, unless stated otherwise. Cite this article:
Castle Hill (Ipswich, Massachusetts) Facts for Kids. Kiddle Encyclopedia.