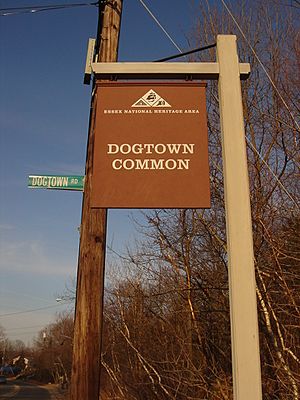 The entrance to Dogtown Common, on Cherry Street

Once known as the Common Settlement and populated by respectable citizens, the area later known as Dogtown is divided between the city of Gloucester and the town of Rockport. It is in an area not particularly suited to agriculture, due to poor and very rocky soil. Nevertheless it was settled, beginning in 1693, because its inland location afforded protection from pirates and from enemy natives. Another attraction was that the area lay on what was originally the only direct land route between Sandy Bay (Rockport's original name) and Gloucester. The peak of population, from 1750-1800, is estimated at around 100 families.

After new coastal roads were opened and, especially after the conclusion of the War of 1812 and its attendant risk of coastal bombardment, most farmers moved away from Dogtown. For a few decades their abandoned houses were occupied by itinerants and vagabonds, giving the area its bad reputation.

Some of the last occupants were suspected of practicing witchcraft, 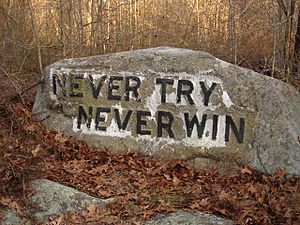 One of the 36 "Babson Boulders" in Dogtown

Most of the area of Dogtown is now a dense woodland, criss-crossed and bisected by trails and old roads. Dogtown Road off of Cherry Street in the western section (the Gloucester side) is lined with the remains of the cellar holes of the settlers, many of which are numbered in correspondence with names from John J. Babson's book of the history of Gloucester. Babson's grandson, Roger Babson, is known for, among other things, his commissioning of unemployed stonecutters to carve inspirational inscriptions on approximately three dozen boulders in Dogtown during the Great Depression. Babson also mapped and numbered the cellar holes left from the homes of Dogtown's former residents.

Most of the land is held in trust by Gloucester and Rockport and is therefore protected in perpetuity. The current state of Dogtown affords rich recreation opportunities to hikers and bikers, dog-walkers, nature lovers, cross-country skiers, geologists and historians. The area is peppered with house-sized boulders, including one named "The Whale's Jaw," which it resembled before collapsing after a picnic campfire got out of control in 1989. The northwest corner of Dogtown is known as the Norton Memorial forest and covers 121 acres. This land is named for Frederick Norton, a NASA physicist and MIT professor whose family owned land on the outskirts of Dogtown. Beginning in the 1930s, Norton planted more than a 100,000 trees and forty different species of ferns there, and also forged and maintained trails nearby.

All content from Kiddle encyclopedia articles (including the article images and facts) can be freely used under Attribution-ShareAlike license, unless stated otherwise. Cite this article:
Dogtown, Massachusetts Facts for Kids. Kiddle Encyclopedia.