Wenham is a town in Essex County, Massachusetts, United States. The population was 4,875 at the 2010 census.

The town of Wenham, originally settled in 1635 and incorporated in 1643, has retained much of its historic character and rural scenery. It is a town of many open views of farm lands, lakes, woodlands, historic homes and old stone walls that accompany its winding tree-lined roads. It features nearly 300 acres (120 ha) of parks, playgrounds and recreational lands.

Wenham is closely tied to its neighboring town, Hamilton, sharing a school system, state-of-the-art library, recreation department, commuter rail station and newspaper. In 2010, the community of Hamilton-Wenham was listed among the "Best Places to Live" by Boston magazine.

Wenham was first settled in 1635 and officially incorporated in 1643.

English settlers first came to Wenham in the 1630s, but the area had been home to Native American Algonquian peoples for hundreds of years. The Algonquians were a peaceful, agricultural group who planted and stored corn, but whose numbers had been greatly reduced by a massive epidemic, probably smallpox, in the early 17th century. Until recent years, Indian artifacts were found frequently throughout Wenham, and a representative collection is in the possession of the Wenham Museum. 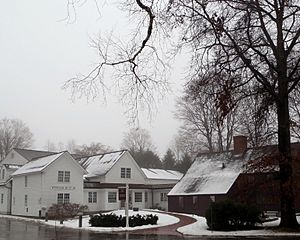 Wenham was originally a part of Salem. Hugh Peters, the minister in Salem, preached to a group on a hill by the Great Pond around 1638, most probably to encourage settlement. The earliest land grants in the Wenham area roughly coincide with Peters' sermon. The hill was leveled in later years to make room for the ice industry at the Great Pond.

In September 1643, the General Court of Massachusetts granted that Wenham should be a town in its own right and send a representative to the General Court. It was the first town to be set off from Salem. Because many of its early settlers came from Suffolk County in England, it is presumed that the name of the town derives from two small villages there—Great Wenham and Little Wenham. Wenham means "home on the moor". A church was formed in October 1644, with John Fiske as pastor and seven families as members.

In those early days, the church and government were one. A small part of the population—those who were church members—controlled both civil and religious life. It was not until 1833 that an amendment to the Massachusetts Constitution separated church and town.

Wenham provided volunteers in King Philip's War in the 1670s, and the French and Indian War in the early 1700s. In 1774, the town voted to select 15 men as minutemen, and from that time on Loyalists were not welcome in Wenham.

The Industrial Revolution, which changed the face of many Massachusetts towns in the 19th century, passed Wenham by. It remained a small community, with one notable exception. Wenham's ice industry brought the name of Wenham to the notice of people as far away as London, where hotels in the 1850s advertised: "We serve Wenham Lake Ice." Artificial refrigeration and a fire that destroyed the ice house in 1973 brought an end to this unique industry.

Although slaves were owned by Wenham residents in the 18th century, by the 1850s sentiment was fervently in favor of abolition. Between 1862 and 1865, the army camp, Camp Landers, occupied 14 acres (5.7 ha) in Wenham. Part of this tract is now Pingree Field. There were accommodations for two full regiments of Union soldiers with barracks, mess halls, and training fields.

In 1909, Henry Clay Frick, a steel magnate, bought the present-day Iron Rail property so that his daughter Helen could create a vacation home for the mill girls throughout New England. Helen Frick transferred the Iron Rail Vacation Home to the Girls' Clubs of America in 1954, and the town of Wenham bought the property in the 1970s. 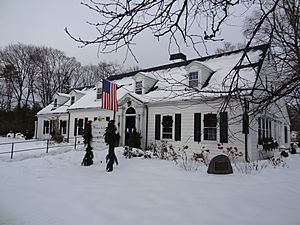 Two other Wenham landmarks, the Tea House and the Wenham Museum, have their roots in the Wenham Village Improvement Society. A group of ladies organized the society in 1893 to make Wenham more beautiful by planting more shade trees. They purchased Mr. Henry Hobb's harness shop as a home for a tea house and exchange for selling ladies' handiwork, jams and jellies. The Tea House and Exchange has continued through the years as the successful fundraising arm of the Wenham Village Improvement Society.

In 1921, the Historical Committee of the Wenham Village Improvement Society encouraged the society to buy the 17th-century Claflin-Richards house at the center of town. They did so, and eventually added "the Barn" (which would become Burnham Hall) and the museum. The Wenham Historical Association and Museum became independent from the Village Improvement Society and underwent a major renovation and expansion in 1997.

According to the United States Census Bureau, the town has a total area of 8.1 square miles (21.1 km2), of which 7.6 square miles (19.8 km2) is land and 0.46 square miles (1.2 km2), or 5.91%, is water. It is one of the inland communities within the Metropolitan Area Planning Council's North Shore Task Force, but it is not part of the North Shore in the strictest sense, as it is not on the shore of the Atlantic Ocean (it lies 4 miles (6 km) north of Massachusetts Bay). Wenham Lake lies within the town and in neighboring Beverly, and several other smaller ponds lie within town. A stretch of the Salem Beverly Waterway Canal passes through town as well, and the southernmost portion of the Ipswich River Wildlife Sanctuary lies in the western part of town.

Wenham is bordered on the south by Beverly, on the east by Manchester-by-the-Sea, on the north by Hamilton, on the northwest by Topsfield, and on the west by Danvers. Wenham lies 6 miles (10 km) north of Salem and 21 miles (34 km) north-northeast of Boston. The eastern end of Wenham is crossed by Massachusetts Route 128, with one exit within town. Route 1A crosses through the center of town, with Route 22 crossing through the east and Route 97 crossing the southwest corner of town. Route 35 ends at Route 97 just over the Topsfield town line. Wenham lies along the Newburyport section of the Newburyport/Rockport Line of the MBTA Commuter Rail. There are no stations within town, but the Hamilton/Wenham station lies just north of town, and the North Beverly station lies south of town in Beverly. The tip of the north runway of Beverly Municipal Airport lies just within town; the nearest national and international air service is located at Boston's Logan International Airport.

There were 1,285 households out of which 37.6% had children under the age of 18 living with them, 66.5% were married couples living together, 5.9% had a female householder with no husband present, and 25.5% were non-families. 22.5% of all households were made up of individuals and 15.6% had someone living alone who was 65 years of age or older. The average household size was 2.70 and the average family size was 3.19.

All content from Kiddle encyclopedia articles (including the article images and facts) can be freely used under Attribution-ShareAlike license, unless stated otherwise. Cite this article:
Wenham, Massachusetts Facts for Kids. Kiddle Encyclopedia.