Hamilton is a rural-suburban town in the eastern central portion of Essex County in eastern Massachusetts, United States. At the 2010 census, it had a population of 7,764. Currently the town has no manufacturing industry and no industrially-zoned land.

Its location on the North Shore of Massachusetts provides easy access to the Atlantic seashore with its reservations, beaches and boating. The town includes many historic houses, pastoral landscapes, and old stone walls that accompany winding tree-lined roads. It also has a rich equestrian heritage, which remains strong due to the influence of the many horse farms and of Myopia Hunt Club, which holds frequent equestrian events, including polo most Sunday afternoons. (Myopia also hosts a Thanksgiving Day fox hunt each year that the public may attend.) Thus, the visitor to Hamilton may well share the secondary roads with horse and pony riders. 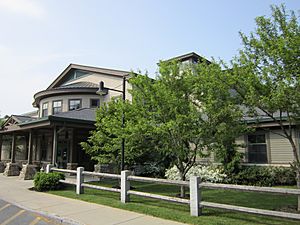 Hamilton is closely tied to neighboring Wenham, sharing a school system, library, recreation department, commuter rail station and newspaper. In 2010, the community of Hamilton-Wenham was listed among the "Best Places to Live" by Boston Magazine.

Hamilton includes South Hamilton, which is that part of Hamilton that the Postal Service has assigned the zip code 01982. "Hamilton" and "South Hamilton" are indistinguishable from each other except for the difference in zip codes. 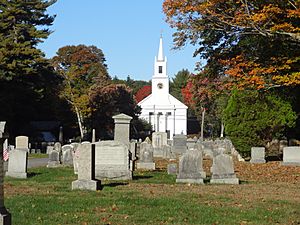 In June 1638, John Winthrop the Younger, son of the founder of the Massachusetts Bay Colony, bought most of present-day Essex County from Masconomet, chief of the Agawam Indians, for the sum of twenty English pounds. A memorial stone on Sagamore Hill in southeastern Hamilton marks where Mosconomet was buried with his gun and tomahawk around 1658.

Hamilton was first settled in 1638 and was originally a section of Ipswich known as "The Hamlet". The first recorded land grant in the Hamlet was Matthew Whipple's farm, dated 1638. Three years later the new stagecoach road from Boston to Newburyport (Bay Road) was laid out through the Whipple land. Other early settlers of the Hamlet, including the Appletons, Winthrops, Lamsons, and Dodges, were attracted by countryside similar to the English farms and estates they had left behind. 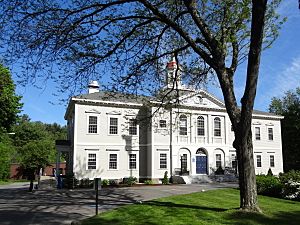 The town was incorporated on June 21, 1793, and named for Alexander Hamilton, whose portrait became the town seal in 1903. With the arrival of the Boston and Maine Railroad in 1839, the population center moved gradually southward toward the depot.

The farm village proved to be an attractive location for Boston groups seeking land for recreation and renewal. A Methodist ministers' association first held a camp meeting at Asbury Grove in 1859. In the 1880s, the Myopia Hunt Club, which had been named in jest for its nearsighted founders, moved from Winchester, Massachusetts, to the Gibney Farm in Hamilton. Beginning as a lawn tennis and baseball club, it turned to polo, the hunt, and golf as members built large summer estates in the area. Myopia donated the site for the General George S. Patton Memorial Park to the town of Hamilton. The park continues to be a recreation center for the town.

In 1921 the Mandell family built the Community House in memory of the eight men in Hamilton and Wenham who died in military service during World War I, including their son, Sam. They commissioned Guy Lowell, a respected architect of Boston and New York, to design the building, and gave the Community House in trust for the use of the residents of both towns. Although in its early days the Community House offered activities such as bowling and a men's smoking room, it now features a wide range of classes and activities for all ages.

According to the United States Census Bureau, the town has a total area of 14.9 square miles (38.6 km2), of which 14.2 square miles (36.7 km2) is land and 0.73 square miles (1.9 km2), or 4.89%, is water. Hamilton lies 5 miles (8 km) inland from Massachusetts Bay, and both the eastern and western portion of town are bordered by water, with the Ipswich River to the west and Chebacco Lake and several other small ponds to the east. The highest point in town is found on Blueberry Hill in Bradley Palmer State Park, with an elevation of at least 215 feet (66 m), according to the most recent (2011-2012) USGS 7.5-minute topographical map. Several areas of town are protected, including Myopia Hunt Club and parts of Bradley Palmer State Park, Appleton Farm Sanctuary, and the Ipswich River Wildlife Sanctuary.

Hamilton is bordered by Ipswich to the north, Essex to the east, Manchester-by-the-Sea to the southeast, Wenham to the south, and Topsfield to the west. It is located 8 miles (13 km) north of Salem and 23 miles (37 km) northeast of Boston.

There were 2,668 households out of which 66.6% had children under the age of 18 living with them, 71.1% were married couples living together, 7.3% had a female householder with no husband present, and 19.7% were non-families. 15.7% of all households were made up of individuals and 7.0% had someone living alone who was 65 years of age or older. The average household size was 2.87 and the average family size was 3.22.

All content from Kiddle encyclopedia articles (including the article images and facts) can be freely used under Attribution-ShareAlike license, unless stated otherwise. Cite this article:
Hamilton, Massachusetts Facts for Kids. Kiddle Encyclopedia.