Beverly Farms is a neighborhood comprising the eastern part of the city of Beverly, Massachusetts. It is an oceanfront community with a population of about 3,500 which extends from the Manchester-by-the-Sea border to another section of Beverly known as Prides Crossing. This area is bounded by Prince Street on the south, Greenwood Ave on the north, and Manchester-by-the-Sea on the east. A more exact description is provided in the Massachusetts Acts of 1852 Chapter 157. This area is part of Massachusetts's North Shore region, about 20 miles north of Boston.

Beverly Farms and the adjacent Prides Crossing were originally farming communities, much like the rest of Beverly. In the late eighteenth and early nineteenth centuries, wealthy residents of Boston and New York City built summer cottages along the seashore. These properties were nearly the size and stature of those in Newport, Rhode Island, though only a few of the original mansions remain in the neighborhood today.

In 1887, Beverly Farms unsuccessfully petitioned the Massachusetts legislature for incorporation as a town.

By the mid-twentieth century, Beverly Farms resembled a small town, somewhat secluded from the rest of Beverly and culturally interlinked with Prides Crossing. Working-class neighborhoods sprang up as support for the mansions became necessary. At this point, there was a wide financial gap between the wealthy and the working class.

Beverly Hills, California, was named in 1907 after Beverly Farms, which was a vacation spot of then-President Taft.

Beverly Farms remains a vibrant community with changing demographics. Pockets of residential development and generally escalating real-estate values appear to have adjusted average residency to a wealthier population, much as in the past. 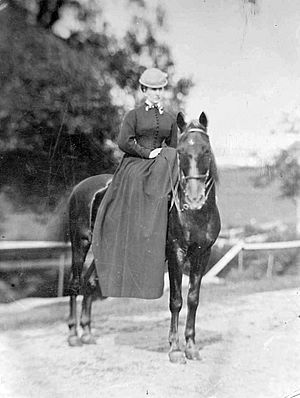 A photograph of Marian Hooper Adams riding on horseback in Beverly Farms.

Life in Beverly Farms is slow-paced in the winter but becomes increasingly active when the warm weather arrives. The summer has many activities for people to enjoy. Many of those activities are based at the local community beach, West Beach: this is a private beach, owned by the residents of Beverly Farms and Prides Crossing; current and former residents of the areas are entitled to beach permits, allowing access to West Beach (non-residents must apply for an access permit; their wait typically is six to ten years, because of the limited size of the facility).

Beverly Farms is busiest at the Fourth of July holiday. A private organization of residents annually raises upwards of $60,000 through fundraisers to enable a weekend-long agenda of activities, including community dances, children's events, softball games, and the well-known "Horrible's" parade. Celebration of the holiday culminates with fireworks at West Beach above a crowd that averages about ten thousand. 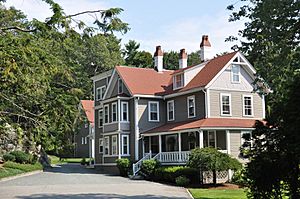 The Oliver Wendell Holmes House is registered on the list of National Register of Historic Places.

All content from Kiddle encyclopedia articles (including the article images and facts) can be freely used under Attribution-ShareAlike license, unless stated otherwise. Cite this article:
Beverly Farms Facts for Kids. Kiddle Encyclopedia.