Anaximenes of Miletus facts for kids 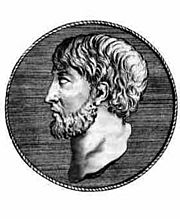 Anaximenes (Greek: Άναξιμένης) of Miletus (c. 585 BC-c. 525 BC) was a Greek Pre-Socratic philosopher from the latter half of the 6th century, probably a younger contemporary of Anaximander, whose pupil or friend he is said to have been.

Anaximenes, like others in his school of thought, practised material monism, the idea that underlying reality is one single thing.

For him, the primary substance was air. it was an attempt to find a natural way to explain the world.

All content from Kiddle encyclopedia articles (including the article images and facts) can be freely used under Attribution-ShareAlike license, unless stated otherwise. Cite this article:
Anaximenes of Miletus Facts for Kids. Kiddle Encyclopedia.