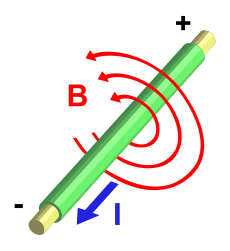 When current flows through a wire it makes a magnetic field around the wire. Usually this field is very weak, so a single wire won't make a magnetic field strong enough to pick up metal objects. In this picture "I" is the current and "B" is the magnetic field.

Electromagnets are temporary and artificial magnets.They are magnets that are only magnetic when there is a coil of wire with electricity running through it. The coil of wire is called a solenoid. The strength of the magnet is proportional to the current flowing in the circuit. The electricity running through the wire is called a current. The current is the flow of electrons, which are negatively charged particles. Electromagnets are used for a variety of purposes. In a simple example, an electromagnet can pick up pieces of iron, nickel, and cobalt.

Electromagnets can be made stronger by adding more coils to the copper wire, or adding an iron core through the coils (for example a nail). The current can also be increased to make the magnetism stronger. British electrician William Sturgeon invented the electromagnet in 1825.

An electromagnet is useful because it can be turned on and off easily (using an electric current), whereas a permanent magnet cannot be turned off and will continue to affect its immediate environment.

Different alloys act differently. Iron stops being an electromagnet very quickly, but steel takes time to wear off. To make an electromagnet, copper wire is wound around an iron rod. The two ends of the wire are connected to the + (positive) and - (negative) side of the battery.

Electromagnets are used in everyday items such as burglar alarms, electric relays and fire bells. Electric motors are basically electromagnets. Their ability to change from the state of non-magnetic to magnetic just by passing an electric current through it allows it to be used in many different items. This ability is used in relays.

Electromagnets can also be used to make electricity. Movement of a magnet back and forth in front of the electromagnet will make an electric current.

The magnetic field made by a single wire is not usually very strong. To make an electromagnet normally the wire is wrapped in many loops to make the fields of each piece of wire add together into one stronger magnetic field.

All content from Kiddle encyclopedia articles (including the article images and facts) can be freely used under Attribution-ShareAlike license, unless stated otherwise. Cite this article:
Electromagnet Facts for Kids. Kiddle Encyclopedia.