Beniamino Gigli ( JEE-lee 20 March 1890 – 30 November 1957) was an Italian opera singer. He is widely regarded as one of the greatest tenors of his generation.

Gigli was born in Recanati, in the Marche, the son of a shoemaker who loved opera. His parents did not, however, view music as a secure career. Beniamino's brother Lorenzo became a well-known painter.

In 1914, he won first prize in an international singing competition in Parma. His operatic debut came on 15 October 1914, when he played Enzo in Amilcare Ponchielli's La Gioconda in Rovigo, following which he was in great demand. 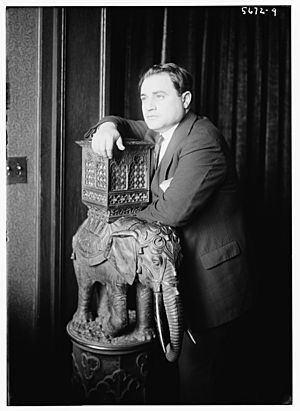 Beniamino Gigli in the 1920s

Some of the roles with which Gigli became particularly associated during this period included Edgardo in Donizetti's Lucia di Lammermoor, Rodolfo in Giacomo Puccini's La Bohème and the title role in Umberto Giordano's Andrea Chénier, both of which he would later record in full.

Gigli rose to true international prominence after the death of the great Italian tenor Enrico Caruso in 1921. Such was his popularity with audiences he was often called "Caruso Secondo", though he much preferred to be known as "Gigli Primo". In fact, the comparison was not valid as Caruso had a bigger, darker, more heroic voice than Gigli's sizable yet honey-toned lyric instrument.

Gigli left the Met in 1932, ostensibly after refusing to take a pay cut. Giulio Gatti-Casazza, the Met's then general manager, was furious at his company's most popular male singer; he told the press that Gigli was the only singer not to accept the pay cut. There were in fact several others, Lily Pons and Rosa Ponselle among them; and it is well documented that Gatti-Casazza gave himself a large pay increase in 1931, so that after the pay cut in 1932 his salary remained the same as it had been originally. Furthermore, Gatti was careful to hide Gigli's counter offer from the press, in which the singer offered to sing five or six concerts gratis, which in dollars saved was worth more than Gatti's imposed pay cut.

After leaving the Met, Gigli returned again to Italy, and sang in houses there, elsewhere in Europe, and in South America. He was criticised for being a favourite singer of the Italian dictator Benito Mussolini, having recorded the Fascist anthem "Giovinezza" in 1937 (it is noticeably excluded from his "Edizione Integrale", released by EMI). Toward the end of World War II, he was able to give few performances. However, he immediately returned to the stage when the war ended in 1945, and the audience acclaim was greater and more clamorous than ever.

In addition to his stage performances, Gigli appeared as an actor in over twenty films from 1935 to 1953. Some notable appearances include 1936's Johannes Riemann-directed musical drama Ave Maria opposite actress Käthe von Nagy and Giuseppe Fatigati's 1943 drama I Pagliacci (English release title: Laugh Pagliacci), opposite Italian actress Alida Valli.

In the last few years of his life, Gigli gave concert performances more often than he appeared on stage. Before his retirement in 1955, Gigli undertook an exhausting world tour of farewell concerts. This impaired his health in the two years that remained to him, during which time he helped prepare his memoirs (based primarily on an earlier memoir, fleshed out by a series of interviews). Gigli was initiated to the Freemasonry.

Like many artists, Gigli was a man of contradictions. On one hand, he gave more fund-raising concerts and raised more money than any other singer in history, with close to one thousand benefit concerts. He was deeply devoted to Padre Pio, his confessor, to whom he donated a large amount of money. Also, Gigli sang an unusual amount of sacred music (especially in the 1950s), atypical of a leading operatic tenor. Additionally, he was throughout his life deeply devoted to the sacred music of Don Lorenzo Perosi.

On the other hand, Gigli's relationships with women were often tainted by scandal.

He said in his memoirs he was married six months earlier than he really was; this was to conceal that his wife Costanza was pregnant before reaching the altar. Gigli had two children with Costanza: Enzo and Rina. (The latter was a well-known soprano in her own right.)

Later, Gigli is well known to have had a second family with Lucia Vigarani, producing three children.

Gigli is rumoured to have had at least three other children with as many different women. Gigli's exact number of offspring is unknown.

Early in his career, Gigli was known for a beautiful, soft and honey-like lyric voice, with incredible mezza-voice, allowing him to sing light, lyrical roles. As he grew older, his voice developed some dramatic qualities, enabling him to sing heavier roles like Ràdames in Aida and Cavaradossi in Tosca. Some critics say that he was overemotional during his performances, often resolving to sobbing and, in some cases, exaggerations.

Many of Gigli's recordings, including complete operas with Maria Caniglia, Rina Gigli, Licia Albanese and Toti dal Monte, have been reissued on CD. Gigli recordings date back to the 1920s.

All content from Kiddle encyclopedia articles (including the article images and facts) can be freely used under Attribution-ShareAlike license, unless stated otherwise. Cite this article:
Beniamino Gigli Facts for Kids. Kiddle Encyclopedia.