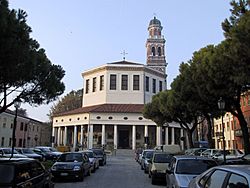 Rovigo is a town and comune in the Veneto region of Northeast Italy, the capital of the eponymous province.

Polesine is the name of the low ground between the lower courses of the rivers Adige and Po and the sea; the derivation of the name is much discussed, generally applied only to the province of Rovigo, but is sometimes extended to the near towns of Adria and Ferrara.

All content from Kiddle encyclopedia articles (including the article images and facts) can be freely used under Attribution-ShareAlike license, unless stated otherwise. Cite this article:
Rovigo Facts for Kids. Kiddle Encyclopedia.