Province of Rovigo facts for kids 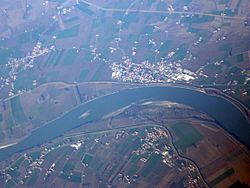 The Po river as it enters the province of Rovigo near Melara. 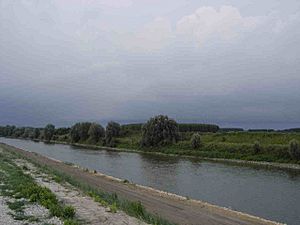 The Adige river as it enters the province of Rovigo near Badia Polesine.

The rivers Po and Adige have had a stable course only in recent times. The land is of relatively recent formation, created by drifts taken by the rivers, and subsidence occurs due to natural consolidation as well as to human activities such as drainage, groundwater extraction and methane extraction.

The Canal Bianco is the only other river that flows across the province. Many canals for drainage have been dug in the province of Rovigo because the Po and the Adige are the first and the third biggest rivers of Italy as for rate of flow and the land has a huge amount of water to deal with; the main canals are the Collettore Padano, the Ceresolo and the Valdentro.

The climate is mild continental with high humidity, having sultry summers and foggy winters; precipitation is normal, usually happens in spring and autumn.

The province of Rovigo suffers the emigration phenomenon even nowadays: young people still use to emigrate to more developed areas of Veneto and of Italy; this leads to population ageing. There are still migrations from rural areas to more developed towns within the boundaries of the province.

The various towns and villages are due to be connected by the SS434 "Transpolesana", a long highway planned to cross nearly the entire province; right now it connects Verona just with Rovigo. A13 toll motorway, connecting Bologna with Padua, and SS309 "Romea" State Road, connecting Venice with Ravenna, pass through the zone.

The motorway exits in the province of Rovigo are Occhiobello, Villamarzana-Rovigo sud and Rovigo.

The territory of the province was first colonized by the Greeks, who founded the colony of Adria in the 12th-11th centuries BC. During the 6th and 5th centuries BC Etruscans and Venetians inhabited the area, followed by the Romans.

In the Middle Ages the region was ruled by the Este as part of the Duchy of Ferrara, but Rovigo was not an administrative unit of the duchy, and there was more than one Podesteria for each side of the Po river.

After the War of Ferrara in 1484 the Republic of Venice started ruling over the northern part of Polesine; the Venetians designated it a territorio whose capital was Rovigo, thus giving the area an administrative unity for the first time. This can be viewed as the start of the province of Rovigo, though its extent was a less than today; the borders were set as the Canal Bianco river with few exceptions: the territories of Polesella, Guarda Veneta, Adria and the delta of the Po were included in the Venetian territorio of Rovigo.

After the Congress of Vienna in 1815 all the territories to the north of the Po were included into the Kingdom of Lombardy-Venetia, thus giving the province its modern extent.

The province is characterized by a thriving agriculture, particularly the cultivation of wheat, maize, rice and sugar beets as well as grapevines, apples, pears, peaches, tomatoes and vegetables.

There are small to medium size factories set in the city of Rovigo and few other centres of the province: they mainly are about food processing (many are sugar refineries), metalworking, carpentry, textile, construction and construction materials. Many Aquaculture farms are set in the wetlands of the delta of the Po.

The province of Rovigo has some famous holiday villages, as Rosolina Mare, Rosa Pineta, and Albarella Island (Isola di Albarella in Italian).

The eastern portion of the province corresponds with the delta of River Po, a large area where the river subdivides into channels (each with its own name). The delta is also a protected area, because it's a national-legally recognized nature park.

All content from Kiddle encyclopedia articles (including the article images and facts) can be freely used under Attribution-ShareAlike license, unless stated otherwise. Cite this article:
Province of Rovigo Facts for Kids. Kiddle Encyclopedia.