Province of Padua facts for kids

The Province of Padua (Provincia di Padova) is a province in the Veneto region of Italy. Its capital is the city of Padua.

The territory is usually divided in the capital city, Padua, and its hinterland, formed by the nearby municipalities; the Alta Pianura (higher plain), north of the city; the Bassa Pianura (lower plain), south of the city, including the Saccisica in the south-east; and the Colli Euganei (Euganei hills) south-west of the city. The Euganei hills are the only heights of the entire province, the other parts being totally plain. 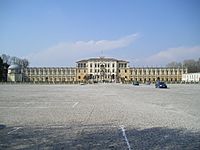 The borders of the province are almost the same of the Medieval commune of Padua, with just some adjustment in the north-east. The territory was administered within these boundaries since the time of the Republic of Venice, but the modern province comes directly from the administrative divisions of Kingdom of Lombardy-Venetia. The Diocese of Padua covers the most part of the province, out of a main part of Alta Pianura; instead it includes areas from the surrounding provinces. 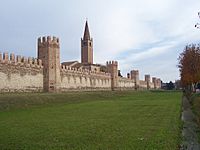 The city walls of Montagnana.

Padua is home to some masterpieces from Medieval and Renaissance art and architecture, while the towns of Cittadella and Montagnana are known for the well preserved Medieval city walls. There are numerous villas in the countryside, a few of them from Palladio, the main ones being Villa Contarini (in Piazzola sul Brenta) and Villa Barbarigo (in Valsanzibio). The Euganei hills offer a relaxing naturalistic site, often covered in woods, while at their eastern slopes there are many ancient spa sites: the Terme Euganee, as Abano Terme, Montegrotto Terme, Galzignano Terme, Battaglia Terme. There is a small part of the Venetian Lagoon lying inside the province, the Valle Millecampi ("one-thousand-fields valley"); and also the river landscapes of the countryside include naturalistic routes, even for cycling or horse-riding. Travelling by boat is possible as well. 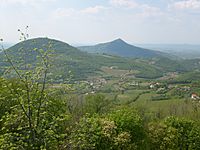 The most part of the province has a temperate sub-continental climate for the Köppen climate classification Cfa); only part of the Colli Euganei have a milder climate, because their southern slopes are above the thermal inversion line by winter, and exposed to the Sun all the year: which allows them to cultivate small olive trees.

The winter is usually moderately cold in the province, avoiding both warm and cold extremes; frost is very common at plain (below the thermal inversion line) with about 60–70 frost days a year, and temperatures usually do not get lower than −8/−12 °C in the plains during the year; but the all-times record for Padua is −19.2 °C by January 1985. The lower plain is slightly colder than the higher plain; snowfalls are highly variable from year to year, and one could see winters with almost no snow as years with frequent snowfalls (Padua has a century average of almost 20 cm/8in during a year). Fog is a common phenomenon, even lasting all the day long, above all in the lower plain.

Summers are moderately hot and wet, warmer and less rainy in the lower plain, while the higher plain is often hit by thunderstorms; Padua has a record of +39.8 °C by August 2003, and usually gets above +36 °C in a year.

Spring and autumn are changeable seasons, which may experience wintry or sultry weather, heavy rainfalls or pleasant sunny days. The period between April and June is usually the wettest one in a year.

Extreme events may sometime hit the province. Flooding is a well-known phenomenon since ancient time, so that all the rivers and channels which cross the plain are embanked, and many channels were dug to avoid frequent flooding. The worst recent events were on 4 November 1966 and on 2 November 2010.

Snowstorms, with some inch of fresh snow and strong Bora gusts, may happen during a normal winter, but rarely can be considered like a blizzard, and usually they do not last more than 1–2 days and with no more than 6-10in (15–25 cm) of snow. Anyway, a really exceptional event happened during the winter of 1608: a snowfall that lasted for 40 consecutive days, from late January to early March, with the snow depth at ground reaching at least 6–7 ft (about 2m) as witnessed by Galileo; a similar event never repeated.

Rarely, between May and September, tornadoes may hit the area as well. The most famous were the one of 17 August 1756, bringing heavy damages to Padua; and the one of 11 September 1970, starting from Colli Euganei and passing through Paduan metropolitan area to end over Venice, an F2 (intensifying up to F4 going onto Venice) on the Fujita scale. Hailstorms are possible as well by summer, the worst recent event having been on 28 August 2003.

The province has a thriving economy, in the metropolitan area and the Alta Pianura, due to the presence of numerous enterprises of every kind, mainly industrial ones, but also from tertiary and primary economical sectors; these areas are also densely populated. The Bassa Pianura is instead a mainly rural area, thus being poorer and less populated. Tourism is developed above all in the spa towns, while both in Padua and in the other parts of the province it may be considered under-developed, aside from the arrival of large numbers of pilgrims in Padua.

Two motorways cross the territory, one being the A4, the other being the A13; Padua has also a highway ring surrounding the city and connecting it to its hinterland. The main railways make almost the same paths of the motorways, going to Venice, Milan or Bologna; but there are minor railways going north (Castelfranco Veneto), north-west (Bassano del Grappa and Trento), south-west (Mantua) and south-east (Chioggia). The main roads follow all those paths.

All content from Kiddle encyclopedia articles (including the article images and facts) can be freely used under Attribution-ShareAlike license, unless stated otherwise. Cite this article:
Province of Padua Facts for Kids. Kiddle Encyclopedia.