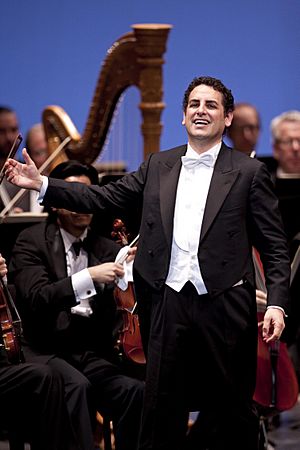 Juan Diego Flórez singing at the Kennedy Center in Washington, D.C. in 2011

Juan Diego Flórez (born January 13, 1973 in Lima, Peru) is a Peruvian operatic tenor. He is famous for the roles he sings in bel canto operas.

Juan Diego Flórez was born in Lima, Peru on January 13, 1973. His father, Rubén Flórez, was a guitarist and singer of Peruvian popular music. His mother worked in a pub where music was performed live. When a musician was ill Juan would sing instead. It was good experience for him.

He entered the Conservatorio Nacional de Música in Lima at the age of 17. He was intending to have a career in popular music. His teacher Andrés Santa María found that he had a superb voice for classical music. He became a member of the Coro Nacional of Peru and sang as a soloist in Mozart's Coronation Mass and Rossini's Petite Messe Solennelle.

He was given a scholarship to the Curtis Institute in Philadelphia where he studied from 1993 to 1996 and began singing in student opera productions. He sang roles in operas by Rossini, Bellini and Donizetti. During this period, he also studied with Marilyn Horne at the Music Academy of the West in Santa Barbara. In 1994 the Peruvian tenor, Ernesto Palacio invited him to Italy to work on a recording of Vicente Martín y Soler's opera Il Tutore Burlato. Palacio became Flórez's teacher and helped him an enormous amount in his career.

Flórez's first big breakthrough came in 1996, at the Rossini Festival in the Italian city of Pesaro, Rossini's birthplace. At the age of 23, he was asked to sing the leading tenor role in Matilde di Shabran when Bruce Ford became ill. He first sang at La Scala in the same year as the Chevalier danois in Gluck's Armide. His Covent Garden debut followed in 1997 where he sang the role of Count Potoski in the world premiere of Donizetti's Elisabetta. Debuts followed at the Vienna Staatsoper in 1999 as Count Almaviva in Il barbiere di Siviglia and at the New York Metropolitan Opera in 2002, again as Count Almaviva. On February 20 2007, the opening night of Donizetti's La Fille du régiment at La Scala, Flórez broke the theater's 74-year-old tradition of not having any encores when he repeated the aria "Ah! mes amis" with its nine high C's after the audience gave him an enormous ovation.

Flórez sing in concerts in Europe, North America, and South America. Amongst the many places in which he has given concerts and recitals are the Wigmore Hall in London, the Théâtre des Champs-Elysées in Paris, Lincoln Center and Carnegie Hall in New York, the Palau de la Música in Barcelona, the Teatro Segura in Lima, and the Mozarteum in Salzburg. As a change from the usual music he sings, he sang "You'll Never Walk Alone" from the Broadway musical Carousel at the Berlin Live 8 concert in 2005.

He was signed by Decca in 2001 and since then made 5 CDs for them. Nearly all his operatic roles have been broadcast on radio or television.

Flórez was married to German-born Julia Trappe in a private civil ceremony on April 23, 2007 in Vienna. They held a religious ceremony at the Basilica Cathedral in Lima on April 5, 2008. Some of Peru's most famous people went, including President Alan García and author Mario Vargas-Llosa.

Juan Diego Flórez has won many awards and distinction, including Peru's highest honour: the Gran Cruz de la Orden del Sol del Perú. He has even appeared on a Peruvian stamp.

All content from Kiddle encyclopedia articles (including the article images and facts) can be freely used under Attribution-ShareAlike license, unless stated otherwise. Cite this article:
Juan Diego Flórez Facts for Kids. Kiddle Encyclopedia.