Miro Heiskanen (born 18 July 1999) is a Finnish professional ice hockey defenceman for the Dallas Stars of the National Hockey League (NHL). Ranked in the top ten eligible European skaters by the NHL Central Scouting Bureau, Heiskanen was picked third overall in the 2017 NHL Entry Draft by the Stars. 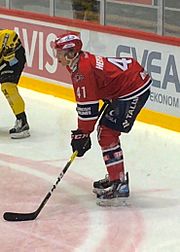 Heiskanen played hockey until the age of 14 in the youth program of Finnish Liiga club Espoo Blues, later Heiskanen played within the youth program of HIFK. In playing at the Jr. A level during the 2015–16 season, he recorded 14 points in 30 games to be awarded with the Yrjö Hakala Award as rookie of the year. On 30 May 2016, he signed a three-year contract extension with the HIFK organization.

During the 2016–17 season, at age 17, Heiskanen made his professional debut with HIFK in the Liiga. In playing the full season in the Liiga, he played on HIFK's top defensive pairing, scoring 5 goals and 10 points in 37 games. HIFK head coach Antti Törmänen described him as his team's best defenceman that season, praising his ability to always make the right decisions. By the end of the season, Heiskanen was considered a top prospect at the 2017 NHL Entry Draft, with Göran Stubb of NHL Central Scouting describing him as "by far the best European defenceman in the draft". Heiskanen was ultimately selected third overall by the Dallas Stars.

On 8 July 2017, Heiskanen signed a three-year, entry-level contract with the Stars. Heiskanen spent the 2017–18 season on loan with HIFK.

Heiskanen was named to the Stars' roster to start the 2018–19 season and made his debut on 4 October in a 3–0 win over the Arizona Coyotes. On 25 October, in a 5–2 Stars win over the Anaheim Ducks, Heiskanen scored his first career NHL goal, beating goaltender John Gibson off a pass from Jason Spezza. In so doing, at 19 years and 99 days, Heiskanen became the second-youngest Stars defenceman to score a goal. On 2 January 2019, Heiskanen was named the Stars' lone representative at the 2019 NHL All-Star, becoming the second rookie in the Stars/North Stars franchise history to be named to the All-Star Game. At the time of his selection, he was tied for seventh in the league among rookies and second amongst rookie defencemen with 17 points. As the Stars qualified for the 2019 Stanley Cup playoffs, Heiskanen became the third defencemen under the age of 20 to score two goals in a playoff game.

On 30 August 2020, in Game 4 of the Stars' second round playoff series against the Colorado Avalanche, Heiskanen would set the Stars' playoff record for points by a defenceman with 16. In reaching the 2020 Stanley Cup Finals, Heiskanen ended the playoff campaign with 26 points in 27 games, the fourth most by any defenceman during a playoff year in league history, behind only Paul Coffey in 1985, Brian Leetch in 1994 and Al MacInnis in 1989. The Stars would ultimately lose to the Tampa Bay Lightning in six games. 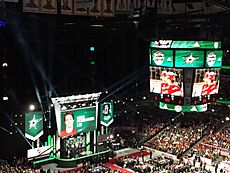 Heiskanen was selected third overall in the 2017 NHL Entry Draft.

All content from Kiddle encyclopedia articles (including the article images and facts) can be freely used under Attribution-ShareAlike license, unless stated otherwise. Cite this article:
Miro Heiskanen Facts for Kids. Kiddle Encyclopedia.