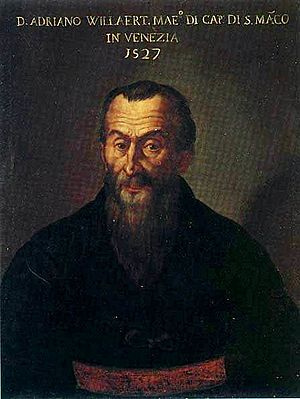 Adrian Willaert (pronounce: AH-dree-ahn VIL-art), (born Flanders about 1490; died Venice, 7 December 1562) was a Flemish composer in the Renaissance period. He was one of the most important composers of his time. He went to Italy when he was young and spent the rest of his life there. He belonged to the group of composers who lived and worked in Venice at the time, and who were known as the “Venetian School”.

He may have been born in Bruges which is now in Belgium, although we are not sure. One of his students, Gioseffo Zarlino, who became a well-known music theorist, said that Willaert went to Paris first to study law, but then decided to study music. In Paris he met Jean Mouton, the main composer of the French royal chapel, and studied with him. Mouton taught him to write music in the style of Josquin, whose music was very polyphonic with the voices imitating one another a lot.

Sometime around 1515 Willaert first went to Rome. There is a story, which is probably true, that Willaert was surprised to find the Pope’s choir singing something he had composed. The choir thought it had been composed by Josquin, who was very famous by then. When the young Willaert told them that he himself was the composer, the choir did not believe the young man, and refused to sing it again.

Willaert then got the most important musical job in the whole of Europe at that time: he became maestro di cappella (director of music) at the church of St. Mark's at Venice. The director who had been there before had not been very good, so Willaert made the music in that church really great again. He stayed in that job until his death. He was very famous and young composers came from all over Europe to study with him and learn how to be a composer.

Willaert was one of the greatest composers of the Renaissance and the most important composer in Europe between the death of Josquin and the time of Palestrina.

All content from Kiddle encyclopedia articles (including the article images and facts) can be freely used under Attribution-ShareAlike license, unless stated otherwise. Cite this article:
Adrian Willaert Facts for Kids. Kiddle Encyclopedia.