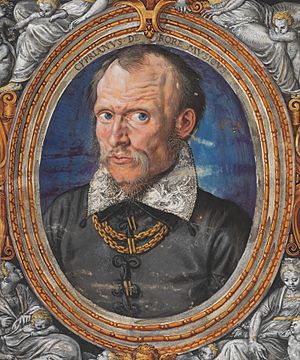 Detail of a miniature of Cipriano de Rore by Hans Müelich, probably 1558 or 1559

Cipriano de Rore (born in Ronse, Flanders, 1515 or 1516; died Parma, September 1565) was a composer who lived in the Renaissance period. He was Flemish, but spent all his adult life in Italy. The name de Rore is a proper Flemish name, not a name that has been changed to look Italian. He was one of the most important composer of madrigals in the 16th century.

There is very little known about Rore's early life. He was born in a small town called Ronse (Renaix) in what is now Belgium. It is possible that he had music lessons in Antwerp. We think that he was taken to Italy by Margaret of Parma in 1533 as one of her servants. Margaret, who was an illegitimate daughter of Charles V, was very wealthy and she married into the Medici family. Rore probably continued to learn about music in Italy.

In his music publications de Rore is called a “disciple” of Adrian Willaert. We do not know whether this means that he had lessons from Willaert, or just that he learned to compose by studying Willaert’s music. His first book of madrigals was published in 1542, and then two books of motets were published.

In 1546 Rore went to Ferrara, where he was maestro di cappella (choirmaster). He wrote a great deal of music in Ferrara. He worked for the Duke Ercole II d'Este. He composed masses, motets, chansons, and lots of madrigals, some of which were about things that happened in the court at Ferrara. The duke awarded him an important honour. Rore also wrote music for Albrecht V of Bavaria who lived in Munich.

He left his job in Ferrara and went back to Flanders where he found his home town Ronse had been destroyed in a war. He went back to Ferrara, but could not get his old job back. After another visit to Flanders he returned to Italy and got a job in Parma, but the music in that town was not very good. For a short time he had a very important job of maestro di cappella at St. Mark's. Adrian Willaert had just died. However, Rore only kept this job for a year, returning to Parma in 1564 and dying there the next year.

Rore is best known for his Italian madrigals, but he also wrote a lot of church music, including masses and motets. He learned from studying the music of Josquin. His madrigals are based on the style of Willaert. He enjoyed writing thick counterpoint and making the voices imitate one another a lot. Most of the words he set were serious words, not lighthearted and amusing. He often used chromaticism. He developed his musical style a lot during his lifetime. His music was very important in the development of the Italian madrigal, and it led the way to the madrigals of Monteverdi.

All content from Kiddle encyclopedia articles (including the article images and facts) can be freely used under Attribution-ShareAlike license, unless stated otherwise. Cite this article:
Cipriano de Rore Facts for Kids. Kiddle Encyclopedia.