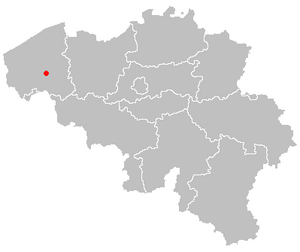 Roeselare was already known in 847 and was from the 10th century an important centre for industrial and commercial activities. Since 1250, the place was recognized as a city with several rights.

Around 1260, there was built a belfry and a city hall at the 'Grand Place'. Because there were no defense facilities around the city, it was an easy target for ennemies. To guarantee safety, they started in Roeselare soon with a few teams of city guards. Of course, they could not much do in times of war. In 1488 and 1492, the city was destroyed by the army of Maximilian from Austria. Almost every building from the early Middle Ages collapsed. Around 1500, the city was rebuilt in a different architecture.

The centre of Roeselare always belonged to the property of Wijnendale.

There was peace in Roeselare during a short time. On the 26th August 1566, several statues in the Saint-Michaels Church and the hall were destroyed because of religeous protests called ‘the beeldenstorm’. After the Eighty Years War, all the successful textile industries were completely gone out of the city. Then started a period with a lot of economical problems but there was also something positive. In Venice became a componist from Roeselare named Adrian Willaert popular.

After the peace of Nijmegen became Roeselare a part of France and a frontier city famous for its illegal frontier traffic. There was no money to restore the belfry and hall that collapsed on the 30th October 1704. The fall of the tower caused a lot of damage. A smaller new hall burned down in 1749. Under the present-day grand place are the cellars of the old belfry.

In spite of all the disasters that came over Roeselare in the past, the Saint-Michaels Church is still in quite good condition. Because of heavy weather on the 19th January 1735 has the tower collapsed. The tower was rebuilt but a few ten metres shorter. The 3 big disasters are the reason that the church has 3 architectures. Around 1770, the townhall was built in rococostyle.

After the Battle of Waterloo became Roeselare Dutch again, untill the independence of Belgium that caused also poverty. The construction of the railway Kortrijk-Brugge (1838) and the invention of the steam-engine made the situation much better. From 1862 till 1872, the canal to the river Leie was dug. That gave a boost to the economy. The industry in Roeselare and the population grew. Roeselare was kown as the Manchester of Belgium.

On the 28th July 1875 took the ‘Groote Stooringe’ place, a student-revolt against the use of French at school. The leader of this revolt was Albrecht Rodenbach, a writer who founded a lot of students’ associations.

The people of Roeselare suffered a lot during World War I. French soldiers, who left Roeselare, offered resistance but the Germans thougth that the inhabitants were shooting on them. Because of this misunderstanding, German soldiers killed 240 citizens and destroyed 252 houses on the 19th October 1914, called ‘Schuwe Maandag’.

After the first World War was the city rebuilt but when that work was done, World War II started. The city has less suffered during this second World War and was liberated by Polish soldiers. Since that liberation, the square ‘Woodmarket’ (Houtmarkt) is now called ‘Polenplein’ and there are monuments for the killed soldiers.

During the 19th and the 20th century, Roeselare was known for its ‘nieuwmarkters’. Nieuwmarkters were merchants / traders from the so called ‘new market’ and they formed in this neighbourhood a ghetto. Nieuwmarkters had their own language for example ‘the Bargoens’ to speak with each other and people said that this merchants could sell everything to everybody. Even they did not speak very well French, German or English, they sold in Wallonia and to foreigners in Roeselare (for example during the two world wars) a lot of products with big profits. The small cheap houses in which the nieuwmarkters lived still exist today and you can see these houses around the Blekerijstraat and in a few streets around the old cemetery in Roeselare.

Specialists think that the name of Roeselare refers to the elements Roes (= reed) + laar (= open space). So the place-name Roeselare means a marshy open space with reed in the wood.

Besides the centre of Roeselare proper, the municipality consists of the villages of Beveren, Oekene and Rumbeke. Just like in a few other cities, there are in Roeselare several parts of town. These are:

The municipality of Roeselare consists also of a few smaller hamlets. Along the road Roeselare-Menen (N32) lie successively the hamlet of Zilverberg, less than one kilometre to the south of the city centre, and almost two kilometres further the hamlet of Beitem. Both hamlets belong to the territory of the village of Rumbeke.

The city has a few Catholic parishes and a Protestant church.

The municipality of Roeselare borders on: 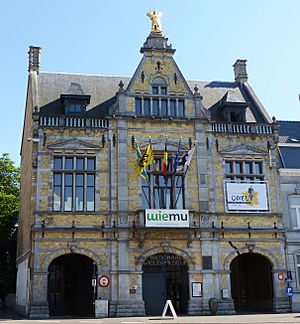 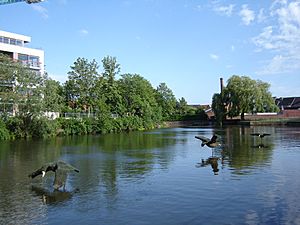 Roeselare has a few musea such as the National Cycling Museum (WieMu). There are art galleries for example the Galery Alfons Blomme. In the tower of the Saint-Michaels church is the bell-tower museum. You can arrange a visit to see the filmmuseum which is a private collection.

There is the Domain ‘Sterrebos’ and nature reserve ‘De Kleiputten’. In the city centre you can take a rest in a few parks such as ‘De Grote Bassin’ which is a lake with green surroundings for example ‘Het Sint-Sebastiaanspark’ and ‘Het Noordhof’. De ‘Kleine Bassin’ and ‘De Ronde Kom’ are two smaller lakes. You have also ‘Het Rodenbachpark’, ‘Het Collegepark’ and ‘Het Heilig Hartpark’ that are nice resting places in the city. You can enjoy the silence of the old municipal cemetery in the Groenestraat, the park of the famous inhabitants in popular language. In summer, there are parkconcerts in ‘Het Sint-Sebastiaanspark’, better known as ‘De Grote Bassin’. The idea of ‘garden-suburb’ arised in the neighbourhood of Roeselare at the beginning of the last century. So was ‘Batavia’ one of the first garden-suburbs in Belgium.

The weekly market on Tuesday morning is a tradition in Roeselare and is organized at the Grand Place, ‘De Botermarkt’ and ‘Het Polenplein’. These 3 squares are pedestrian precinct. On the 1st May, the inhabitants celebrate Labour Day at the station-square. Each year on the National Holiday (the 21st July) there is a street run with music.

Roeselare is in West-Flanders a regional commerce centre. There are a few shopping-streets in the city centre: Ooststraat, Noordstraat, Sint-Amandsstraat, Manestraat, Wallenstraat, Zuidstraat etc. These are situated around 4 squares: de Grote Markt (the Grand Place), het Polenplein, de Botermarkt en het De Coninckplein. There is also de Ardooisesteenweg, an approach road near the railway-station. Along the restored inner ring road (Noordlaan, Westlaan…) and the approach road Brugsesteenweg are a lot of big stores.

In the quarter ‘Schiervelde’ along the outer ring road is the Expo located. In this hall are commercial events where businesses show their services to business-people, -friends and the public. Examples of such events are: de Jaarbeurs, de Bouwbeurs, Agro Expo and Roslar Expo.

In Roeselare is the head-office and printing-business of Roularta Media Group located. The regional Television WTV-FOCUS broadcasts from the Accent Business Park. Roeselare is also known for the foodindustry (Soubry) and the lightdesign.

The most important business-sites and industrial estates are located to the north of Roeselare-city in Beveren and to the east along the canal Roeselare-Leie and the factory site ‘Mandeldal’. 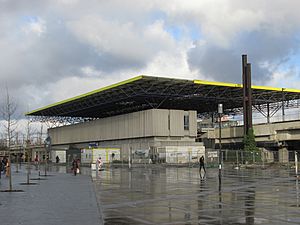 Roeselare has a central situation along the most important north-south connecting roads through the province. The highway A17/E403 passes by the city and has three exits to Roeselare. The road Brugge-Torhout-Roeselare-Menen (N32) dates from the Austrian time and runs parallel to the A17/E403. De Westlaan, a half small ring road, leads the road-user around the historic centre of the city. A more recent ring road (R32) surrounds the whole built-up area of Roeselare and links also up to the highway A17.

At the end of 2014, the software of the parkingguidesystem was renewed. Along the approach roads, the motor drivers are informed about free parkings. The most important parkings in the centre are ‘Wallenparking’, ‘De Munt’ and ‘B-Parking Station’. When the city centre is shopping precinct, inhabitants and visitors are advised to use for example the parking of the Expo and / or to come into the centre with public transport (train, bus).

The city has a railway-station, the station of Roeselare, with two rails on the line Brugge-Kortrijk. There is a half-hourly connection service with both cities. Near the railway-station is a busstation with 11 platforms. When the station was built in 1976-1979, it looked modern at the time with a raising railway that replaced four level crossings. At the end of 2007, the municipality and several partners of public transport organizations decided to modernize the neighbourhood of the station. They invest together 35 million euro. The work was planned to be done in 2012 but they worked at the new building of the station until the summer of 2018. Meanwhile are the underground parking and new busstation ready. The surroundings of the station are mainly shopping precinct.

Since 1910, two football-clubs dominated in Roeselare: Sportvereniging Roeselare (after World War I known as SK Roeselare) and Football Club Roeselare (FC). In 1999 fused both clubs and in 2005 played that new club for the first time in the first division. In 2010 reduced the club back to the second division. The quarter ‘Krottegem’ and home of FC Roeselare started in 2000 again with that club.

Roeselare had a restored municipal swimming-bath, ‘het Spillebad’. Since the summer of 2018, there is the new swimming-bath 'Sportoase Schiervelde'. There is sportinfrastructure in the villages of Beveren, Rumbeke and Roeselare proper (such as the Schiervelde Stadium, home of KSV Roeselare). Around 2000 was near that stadium a new sportaccommodation built for volleyball-club Knack Randstad Roeselare that belongs to the national top in Belgium. In that building, there are also concerts. Other sportclubs are Basketball-club BBC Wytewa (1957) and the Knack Handball-team Roeselare. The Rodenbach horsemen represent the city in the national ridersclubs.

There are a lot of schools in Roeselare of each level except for an university. The main providers of education such as Catholic education (ARKORUM), municipal education and community education are represented. There are rooms, pubs and festive halls for students. There are youth organizations, youth clubs and youth work. There are municipal play-grounds and recreation-grounds.

The two medium size hospitals of Roeselare, a municipal and private one, are fused at the beginning of 2015 and got the name AZ Delta.

The magazine ‘RSL’ explains the municipal policy and the magazine ‘Uit’ describes which social-cultural activities take place in a specified period.

All content from Kiddle encyclopedia articles (including the article images and facts) can be freely used under Attribution-ShareAlike license, unless stated otherwise. Cite this article:
Roeselare Facts for Kids. Kiddle Encyclopedia.