Belfries of Belgium and France facts for kids 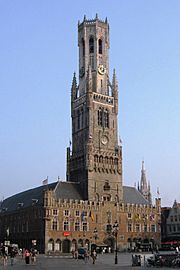 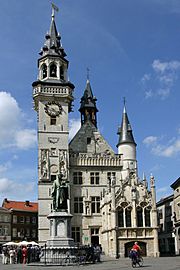 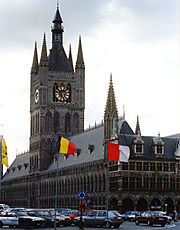 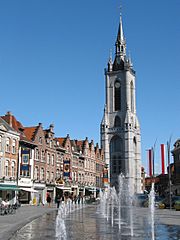 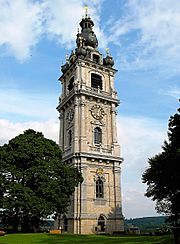 The Belfries of Belgium and France are a group of 56 historical buildings. They are part of UNESCO World Heritage Sites in Europe. It shows a design change from feudal and religious influence in historic Flanders and its neighboring regions of the Duchy of Burgundy.

UNESCO included 32 towers of Belfries of Flanders and Wallonia in 1999. In 2005, the bell tower of Gembloux in the Walloon Region of Belgium and 23 others from the Nord-Pas-de-Calais and Picardy regions were added to the renamed list. Brussels Town Hall and its bell tower were not included since was already part of the Grand Place World Heritage Site.

Additional six church towers were also added since they served as watchtowers or alarm bell towers. These include Cathedral of Our Lady in Antwerp, St. Rumbolds Cathedral in Mechelen, St. Peter's Church, Leuven, St. Germanus Church in Tienen, the Basilica of Our Lady in Tongeren and St. Leonard's Church in Zoutleeuw.

The ID numbers match the order in the complete list ID from 943 to 943bis from UNESCO.

All content from Kiddle encyclopedia articles (including the article images and facts) can be freely used under Attribution-ShareAlike license, unless stated otherwise. Cite this article:
Belfries of Belgium and France Facts for Kids. Kiddle Encyclopedia.