Baldwin I, Count of Flanders facts for kids 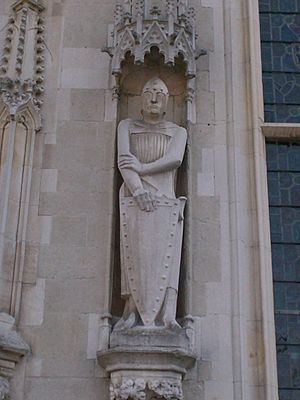 Statue of Baldwin I, Count of Flanders in Bruges (Belgium).

Baldwin's father was named Audacer but little else is known of him. His family was related to the counts of Laon. Before holding Flanders Baldwin was already a count, probably at Ghent. Baldwin was in Senlis in 862. Somehow he decided to take Judith, the daughter of Charles the Bald, the king, for his wife. Judith, had been the wife of two English kings, Athelwulf († 858) and Athelbald († 860). On her return and still in her teens she was being held at the castle of Senlis by her father. Baldwin took Judith, the twice widowed daughter of Charles the Bald, and the couple fled to the court of Lothair II, king of Lorraine. He was Judith's cousin. Once they were safely out of her father's reach Baldwin married her. This was about 863. King Charles had his bishops excommunicate the couple. He also demanded that his nephew return Baldwin and his daughter Judith to him. At this point Baldwin and Judith fled to Rome. They asked Pope Nicholas I to intercede and legitimize their marriage. Baldwin made known his intent to join the Vikings if his marriage was not allowed. Vikings were a constant threat in northern France and Baldwin was needed to help fight them. The pope decided their marriage was valid and had the bishops withdraw their excommunication. Charles the Bald was forced to accept Baldwin as his son-in-law. The couple was married a second time, in public. Her father did not attend but sent officials to witness the marriage. He gave Baldwin the honors the pope recommended.

Baldwin was given rule over Flanders with the title of margrave (count of a borderland) of Flanders. He protected Flanders for the next fifteen years from Vikings. He became known for his harsh treatment of anyone attacking Flanders. This later gave him the name "Baldwin Iron Arm". In 867 Baldwin built a castle at Ghent to protect from Viking raids. The city built up around the castle. Ghent became the seat of his countship. Baldwin also built a castle at Bruges, the port city on the North Sea. It too was for the purpose of stopping Viking plundering. When Charles the Bald died in 877, Baldwin faithfully supported his son, Louis the Stammerer, helping him become king of the Franks. Baldwin died in 879.

Baldwin married Judith (c. 844–after 870), daughter of Charles the Bald, King of the Franks and Holy Roman Emperor. Together they had:

All content from Kiddle encyclopedia articles (including the article images and facts) can be freely used under Attribution-ShareAlike license, unless stated otherwise. Cite this article:
Baldwin I, Count of Flanders Facts for Kids. Kiddle Encyclopedia.