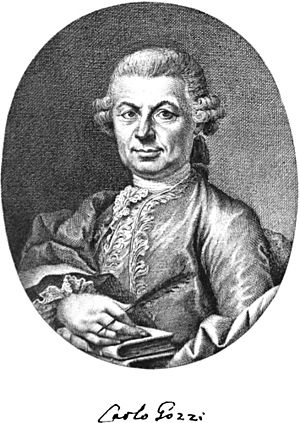 Gozzi was born and died in Venice; he came from a family of minor Venetian aristocracy, the Tiepolos. At a young age, his parents were no longer able to support him financially, so he joined the army in Dalmatia. Three years later, he had returned to Venice and joined the Granelleschi Society. This society was dedicated to the pursuit of preservation of Tuscan literature from the influence of foreign culture; it was particularly interested in saving traditional Italian comedy such as Commedia dell'arte.

Pietro Chiari and Carlo Goldoni, two Venetian writers, were moving away from the old style of Italian theatre, which threatened the work of the Granelleschi Society. In 1757 Gozzi defended Commedia dell'arte by publishing a satirical poem, La tartana degli influssi per l'anno 1756, and in 1761, in his comedy based on a fairy tale, The Love for Three Oranges or Analisi riflessiva della fiaba L'amore delle tre melarance, he parodied Chiari and Goldoni. To perform his play, he obtained the services of the Sacchi company of players, a Commedia dell'arte troupe who had been out of work due to the dwindling interest in Commedia dell'arte after Chiari and Goldoni's efforts. Their satirical powers thus sharpened by personal vendetta, the play was an extraordinary success, and Gozzi donated his play and the rest of his fairy tales to Sacchi's troupe, which in effect saved the company. While some have called Gozzi the saviour of Commedia dell'arte there has been much debate due to the fact that Gozzi wrote out all his scripts and traditional Commedia dell'arte is mainly improvised.

Struck by the effect produced on the audience by the introduction of the supernatural or mythical element, which he had merely used as a convenient medium for his satirical purposes, Gozzi produced a series of dramatic pieces based on fairy tales. These were hugely popular, but after Sacchi's company disbanded, they were unjustly neglected. Gozzi's fairy tales drew influence from Commedia dell'arte, and the popularity of them caused a revival of Commedia dell'arte in Italy. These fairy tales were much praised by Goethe, Schlegel brothers, Hoffmann, Madame de Staël, Sismondi and Ostrovsky. One of them, Turandot or La Turandotte, was translated by Friedrich Schiller and staged by Goethe in Weimar in 1802 with great success. Gozzi was acclaimed throughout most of Europe, but was less esteemed in his own homeland.

In the last years of Gozzi's life he had begun to experiment by producing tragedies with largely comical influences, but these endeavors were met with harsh critical response. He then began to work in Spanish drama, and found minor success before his death. He was buried in the church of San Cassiano in Venice.

He is well known for his feuds with Carlo Goldoni and Pietro Chiari between 1756-1762 over the changing style of Italian theatre that was moving away from the masked and improvised styling of Commedia dell'arte.

He was the titular protector of Teodora Ricci, and caused the voluntary exile of Pier Antonio Gratarol, a member of Venetian society whom Gozzi's Draghe d'Amore was partially based on, for having an affair with and ruining the reputation of Ricci.

His brother, Gasparo Gozzi, was also a well-known writer of the time.

His collected works were published under his own superintendence at Venice in 1792, in 10 volumes.

A number of twentieth-century stage works were inspired by Gozzi's plays. These include treatments of Turandot by Karl Vollmöller and Bertolt Brecht, operas based on the same story by Ferruccio Busoni, and, more famously, Giacomo Puccini, Sergei Prokofiev's The Love of Three Oranges, Alfredo Casella's La donna serpente and Hans Werner Henze's König Hirsch.

Fiabe Teatrali — "Tales for the Theatre" 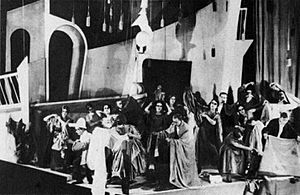 All content from Kiddle encyclopedia articles (including the article images and facts) can be freely used under Attribution-ShareAlike license, unless stated otherwise. Cite this article:
Carlo Gozzi Facts for Kids. Kiddle Encyclopedia.