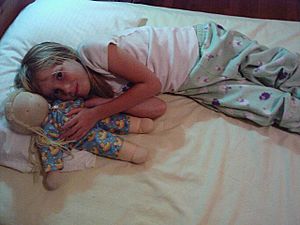 A girl (and her doll) wearing pyjamas.

Pajamas (pyjamas in the United Kingdom) are loose clothes that people wear while they are sleeping. Pyjamas usually include trousers and a shirt. Pyjamas are often made of cotton. They are usually worn without underwear. The word comes from Hindi: पजामा, Pajāmā; Persian: پايجامه.

All content from Kiddle encyclopedia articles (including the article images and facts) can be freely used under Attribution-ShareAlike license, unless stated otherwise. Cite this article:
Pajamas Facts for Kids. Kiddle Encyclopedia.