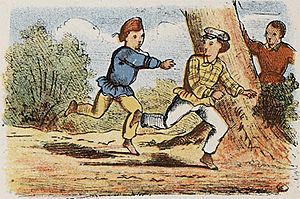 Tag (also known as it, tig and many other names) is a playground game that involves three or more players chasing other players in an attempt to "tag" or touch them, usually with their hands. There are many variations; most forms have no teams, scores, or equipment. Usually when a person is tagged, the tagger says, "Tag, you're it". 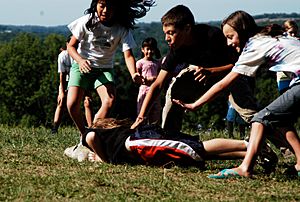 Children playing a version of tag

A group of players (two or more) decide who is going to be "it", often using a counting-out game such as eeny, meeny, miny, moe. The player selected to be "it" then chases the others, attempting to get close enough to "tag" one of them (touching them with a hand) while the others try to escape. A tag makes the tagged player "it" - in some variations, the previous "it" is no longer "it" and the game can continue indefinitely while in others, both players remain "it" and the game ends when all players have become "it".

There are many variants which modify the rules for team play, or place restrictions on tagged players' behavior. A simple variation makes tag an elimination game, so those tagged drop out of play. Some variants have a rule preventing a player from tagging the person who has just tagged them (known as "no tags-back", "no returns", or "can't tag your master").

Players may be safe from being tagged under certain circumstances: if they are within a pre-determined area, off the ground, or when touching a particular structure. Traditional variants are Wood tag, Iron tag, and Stone tag, when a player is safe when touching the named material. This safe zone has been called a "gool", "ghoul", or "Dell", probably a corruption of "goal". The term "gool" was first recorded in print in Massachusetts in the 1870s, and is common in the northern states of the US. Variants include gould, goul, and ghoul, and alternatives include base and home. In the United Kingdom, the base is frequently known as "den". In much of Canada and parts of the northern United States, the state or home base of being immune from tagging is known as "times" or "T."

Players may also make themselves safe from being tagged by the use of a truce term.

The game "British bulldogs" (sometimes also called Bullrush, Cat and Mouse, Cats and Mice, Sharks and Minnows, Spiders and Flies, or Octopus) is mainly played in the United Kingdom, Australia, New Zealand, Canada, and other Commonwealth countries. It is banned from many schools. One or two players start as the "bulldogs", who stand in the middle of the play area, while the other players stand at one end of the area. The aim is to run from one end of the area to the other without being caught by the bulldogs. When a player is caught, they become a bulldog themselves. The winner is the last player "free".

This is a variant of Build Ups in which each person to be caught joins hands with "it," and the chain thus formed must chase the others as a pair. As more people are caught they too join hands with the "it" players, forming a lengthening chain. This variation is also called Blob, or in some places, Gargon. Only those at the ends of the chain are able to catch someone, as they are the only ones with a free hand. A variant has chains of four splitting in two.

How Duck, duck, goose is played

In this game, usually played by young children, the players sit in a circle facing inward. One player, the "picker" or "fox", walks around tapping or pointing to each player in turn, calling each of them a "duck", until finally announcing one of his choosing to be the "goose". The goose then rises and runs around the circle in the opposite direction as the picker, attempting to return to their seat before the "picker" can sit back down in the vacated spot. In Minnesota, this game is referred to as "Duck, duck, gray duck".

Also known as Stuck in the Mud, Scarecrow, Sticky-Glue, Zombie Tag, Ice-and-Water (in Asia) or Ice-and-Fire (in Malaysia), players who are tagged are "stuck in the mud" or "frozen" and must stand in place with their arms stretched out until they are unfrozen. An unstuck player can perform an action to unfreeze them, such as tagging them, crawling between their legs, or "flushing" them by hitting their outstretched hand. the last person standing, for most games, is usually the next person who will be it. ("Toilet tag").

Kiss chase, also referred to as Catch and Kiss, is a tag variant in which tagging is performed by kissing. All members of one gender are "it" at once and chase players of the opposite sex until everyone is caught, then the roles are reversed. A variant is that the player chosen to be "it" will, with assistance from players of the same gender, chase all members of the opposite sex and kiss one of them, who is then "it" on behalf of the other gender.

Last tag was played in the early 20th century, when it was a way to say goodbye when leaving school for home. A player tags another and makes them "it" before leaving on their way home. There is no tagging back. It was a point of honor not to be left with the last tag. If a player is unable to tag anyone by the end of the game, they became "it" the next day.

Octopus tag is a mix between Red Rover and tag. "It," or "octopus," attempts to tag the other players. The playing field is known as the ocean. The players, or "fish," line up along one side of the ocean. When the Octopus calls out, "Come fishies come!", they try to run to the other side without getting tagged. In a variation, once the fish run to the other side without getting tagged, the game pauses until the octopus starts it again. Upon getting tagged the fish become "seaweed" and must freeze or sit where they were tagged, but they can wave their arms around and assist the Octopus in tagging other fish within their reach. The last fish to be tagged becomes the next Octopus. This game can also be played in the water and then it is called Sharks and Minnows.

Manhunt is a mixture of hide and seek and tag, often played during the night. One person is it, while the other players have to hide. Then, the person who is it tries to find and tag them. The game is over when all players are out. Manhunt is sometimes played with teams. In one variant there is a home base in which a player is safe. That version ends when all players who are not safe are out.

One player is chosen to be Mr Wolf and stands facing away from the other players at the opposite end of the playing field. All players except Mr Wolf chant in unison "What's the time, Mr Wolf?", and Mr Wolf will answer in one of two ways: Mr Wolf may call a time - usually an hour ending in "o'clock". The other players take that many steps towards Mr Wolf. They then ask the question again. Alternatively Mr Wolf may call "Dinner time!", and turn and chase the other players back to their starting point. If Mr Wolf tags a player, that player becomes Mr Wolf for the next round.

In Ringolevio, there are two teams. In one version, one team goes off and hides. The other team counts to a number such as 30 and then goes looking for them. In another version, each team has its own "jail", a park bench or other defendable area. The game goes on until all of one team is in jail. In many ways, Ringolevio is similar to Prisoner's Base. 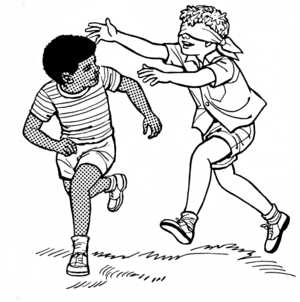 The "Blind man's bluff" variant requires a blindfold to be played

Some variants of tag use equipment such as balls, paintball guns, or even flashlights to replace tagging by hand.

Flashlight tag, also called "Army tag", "Spotlight", and "German Spotlight", is played at night. Rather than physically tagging, the "it" player tags by shining a flashlight beam on other players.

A traditional type of line tag, sometimes played in snow, is Fox and geese. The fox starts at the centre of a spoked wheel, and the geese flee from the fox along the spokes and around the wheel. Geese that are tagged become foxes. The intersections of the spokes with the wheel are safe zones.

One person is "it" and a can is placed in an open space. The other players run off and hide, then it tries to find and tag each of them. Tagged players are sent to jail. Any player who has not been caught can kick the can, setting the other players free from jail.

Laser tag is similar to flashlight tag, but using special equipment to avoid the inevitable arguments that arise about whether one was actually tagged. Players carry guns that emit beams of light and wear electronic equipment that can detect the beams and register being hit. The equipment often has built-in scoring systems and various penalties for taking hits. Pay-per-game laser tag facilities are common in North America.

Paintball is a sport in which players use compressed air guns (called paintball markers) to tag other players with paint-filled pellets. Games are usually played on commercial fields with a strict set of safety and gameplay rules.

A tube sock is filled with a small amount of flour in the toe of the sock; the sock is then gripped by the leg hole and wielded as a flail. Striking a player with any part of the sock counts as a tag.

Spud is a tag variant that is best played in large, open areas. Players begin each round in a central location. "it" then throws a ball high into the air. The other players run but must stop as soon as "it" catches the ball and shouts "Spud!" It may then take three large steps toward the player of his choosing before throwing the ball at that player. If the ball hits the target, that player becomes it, and the game starts over.

All content from Kiddle encyclopedia articles (including the article images and facts) can be freely used under Attribution-ShareAlike license, unless stated otherwise. Cite this article:
Tag (game) Facts for Kids. Kiddle Encyclopedia.