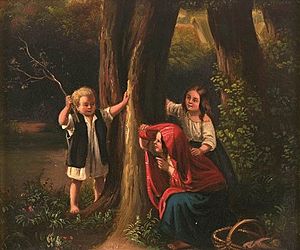 Hide-and-seek (or hide-and-go-seek) is a popular game in which any number of players (ideally at least three) conceal themselves in the environment, to be found by one or more seekers. The game is played by one player chosen (designated as being "it") closing their eyes and counting to a predetermined number while the other players hide. After reaching this number, the player who is "it" calls "Ready or not, here I come!" and then attempts to locate all concealed players.

The game can end in one of several ways. In the most common variation of the game, the player chosen as "it" locates all players as the players are not allowed to move; the player found last is the winner and is chosen to be "it" in the next game. The same way you play tag; Another common variation has the seeker counting at "home base"; the hiders can either remain hidden or they can come out of hiding to race to home base; once they touch it, they are "safe" and cannot be tagged. In Ohio, a hider must yell "free" when he touches base or he can still be tagged out. But if the seeker tags another player before reaching home base, that person becomes "it."

The game is an example of an oral tradition, as it is commonly passed by children.

Different versions of the game are played around the world, under a variety of names. One derivative in game is called "Sardines", in which only one person hides and the others must find them, hiding with them when they do so. The hiding places become progressively more cramped, like sardines in a tin. The last person to find the hiding group is the loser. A. M. Burrage calls this version of the game "Smee" in his 1931 ghost story of the same name. 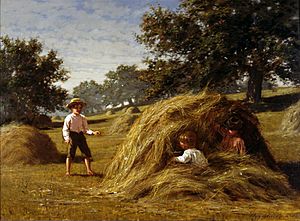 In some versions of the game, after the first player is caught or if not any other players can be found over a period of time, "it" calls out a pre-agreed phrase (such as "Olly olly oxen free", or "All in, All in, Everybody out there all in free") to signal the other hiders to return to base for the next round. In another version, when players are caught they help the "it" seek out others. The original term is "All ye all ye, come for free". Over the years this term has taken on various phrases, the most popular is "Olly olly oxen free".

In one variant, once all hiders have been located, the game then becomes a game of tag where the "it" chases after all the other players and the first person tagged becomes the "it".

In another, the hiders who are found help the "it" track down the remaining hiders, but the first person to be found becomes the next "it."

In some parts of Australia, the game is called "44 Homes." The hiders hide until they are spotted by the seeker, who chants, "Forty, Forty, I see you" (sometimes shortened to "Forty, forty, see you"). Once spotted, the hider must run to "home base" (where the "it" was counting while the other players hid) and touch it before she or he is "tipped" (tagged, or touched) by the seeker. If tagged, that hider becomes the new "it."

In India, hide-and-seek is played differently – if any of the 'hiders' touch the seeker and says 'Dhappa', then the seeker has to count again. However, if the seeker sees the hider before they manage to touch him/her and say dhappa, then that hider will be 'it' the next round, unless some other hider manages to 'Dhappa' the seeker without being seen.But now, instead of doing Dhappa on the "IT"s body, hiders can do dhappa where the "it" counts. The "it" is simply called as "Dianer" (daa-ee-nuh-rr); and the dianers takes a dian.(count)

In Brazil and Russia, hide-and-seek has an extra step. The "it" starts counting with eyes closed and facing the wall while everyone hides. Once the "it" finds someone, they must race to the spot where the "it" was originally counting and facing the wall and whoever touches that spot first, wins the game. This is also sometimes played by other countries.

Hide and seek world championship officially named "Nascondino World Championship" is the unique international hide-and-seek competition, a team play for adults, with non-diversified categories by gender. Born in 2010 in the Italian city of Bergamo, it is held annually in Italy, in summer. The game is a derivative of the Italian version of hide and seek, "nascondino" (hide-and-seek in Italian), and takes place on a playground in the open air, set up with artificial and natural hideouts. The seventh competition took place in September 2017, with 70 teams from 11 countries.

All content from Kiddle encyclopedia articles (including the article images and facts) can be freely used under Attribution-ShareAlike license, unless stated otherwise. Cite this article:
Hide-and-go-seek Facts for Kids. Kiddle Encyclopedia.