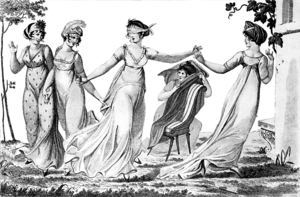 Blind man's buff is played in a spacious area, such as outdoors or in a large room, in which one player, designated as "It", is blindfolded and gropes around attempting to touch the other players without being able to see them, while the other players scatter and try to avoid the person who is "it", hiding in plain sight and sometimes teasing them to influence them to change direction.

Blind man's buff is ideally played in an area free of dangerous obstructions so that the "It" player will not suffer injury from tripping over or hitting something. 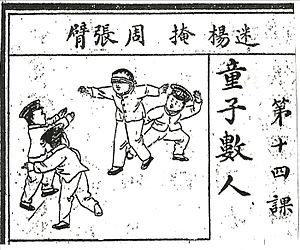 Facsimile of an illustration from the 捉迷藏 lesson in a 1912 Chinese elementary student's schoolbook.

There are several versions of the game: 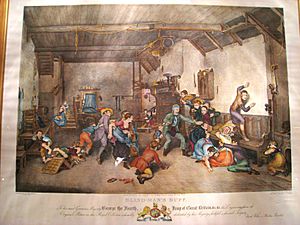 A version of the game was played in Ancient Greece where it was called "copper mosquito." The game is played by children in Bangladesh known as Kanamaachhi [কানামাছি] meaning blind fly. One individual is blind-folded in order to catch or touch one of the others who run around repeating, “The blind flies are hovering fast! Catch whichever you can!” The game has been known to be played since during the Tudor period, as there are references to its recreation by Henry VIII's courtiers. It was also a popular parlor game in the Victorian era. The poet Robert Herrick mentions it, along with sundry related pastimes, in his poem "A New Yeares Gift Sent to Sir Simeon Steward":

That tells of Winters Tales and Mirth,
That Milk-Maids make about the hearth,
Of Christmas sports, the Wassell-boule,
That tost up, after Fox-i' th' hole:
Of Blind-man-buffe, and of the care
That young men have to shooe the Mare

It is also played in many areas in Asia including Afghanistan and all over Europe including Germany.

A children's game similar to blind man's buff is Marco Polo. Marco Polo is usually played in a swimming pool; the player who is "it" shuts their eyes and calls out "Marco" to which the other players must reply "Polo", thus indicating their positions and making it easier for "it" to go in the right direction.

All content from Kiddle encyclopedia articles (including the article images and facts) can be freely used under Attribution-ShareAlike license, unless stated otherwise. Cite this article:
Blind man's buff Facts for Kids. Kiddle Encyclopedia.