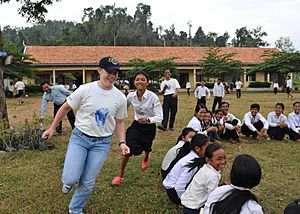 Duck, duck, goose (sometimes called Duck, Duck, Gray Duck or Daisy in the Dell) is a traditional children's game often first learned in pre-school or kindergarten. The game may be later adapted on the playground for early elementary students. The object of this game is to walk in a circle, tapping on each player's head until one is finally chosen and he or she must chase the picker to avoid becoming the next picker. The game is known as "Rumaal Chor" in India. A "rumaal" or handkerchief is thrown by the picker and the players have to constantly search behind them using their hands to search for the handkerchief.

An animated schematic of how duck, duck, goose is played.

A group of players sit in a circle, facing inward, while another player, who is "it", walks around tapping or pointing to each player in turn, calling each a "duck" until finally calling one a "goose". The "goose" then rises and tries to tag "it", while "it" tries to return to and sit where the "goose" had been sitting. If "it" succeeds, the "goose" becomes "it" and the process begins again. If the "goose" tags "it", the "goose" may return to his or her previous spot and the original "it" restarts the process.

Daisy in the Dell

A variation described in the 1919 book, Entertaining Made Easy by Emily Rose Burt, has children standing in a circle, joining hands. The daisy picker goes around the outside, saying "Daisy in the dell, I don't pick you … I do pick you."

"Duck, Duck, Gray Duck" is a variation primarily played by many Minnesotans The core gameplay difference is that the picker taps the heads of the other players while duck calling (ex: blue duck, red duck, purple duck, etc.) and then calls "gray duck" in place of "goose". A similar game was called "Anka Anka Grå Anka." (duck duck grey duck). In some regions and variations, the caller may change the direction in which they run.

"Drip, Drip, Drop" is another version played by children mostly in warmer climates. One player who is "it" goes around the circle with a container of water and pours small "drips" on each person's head. They will then select someone in the circle to "drop" the entire container on top of them. This player will then try to tag the "it" before "it" sits in their spot. If "it" is tagged then they will remain "it" for another round.

A similar, common Afrikaner game is called "vroteier", meaning rotten egg. Instead of saying anything or pointing at anybody a token of some kind (usually a handkerchief) is carried by the one who is "on" going around the circle of sitting players. The token is then dropped behind one of the sitting players who are not allowed to look behind themselves, but can feel with their hands on the ground behind them. If the one behind whom the token has been dropped, discover it, he or she jumps up and chase the one who dropped the token. If the player who was "on" is caught and tagged, he or she will go sit in the middle of the circle and become a rotten egg (vroteier) and the player who did the chasing becomes the next one to be "on". If the player who was "on" was chased all the way around the circle, he or she goes and sit in the place of the player behind whom the token was dropped and that player is then the next one to be "on". If the player behind whom the token has been dropped does not become aware of it and the "on" player went all the way around the circle and catch the player on the ground with the token still behind him or her, the player so caught becomes another rotten egg to sit in the middle. The "on" player remains "on", pick up the token again and repeat the process. The game can continue until there is only one person left who is not a rotten egg or more usually when the "rotten eggs" get tired of sitting in the middle and demand to play another game.

All content from Kiddle encyclopedia articles (including the article images and facts) can be freely used under Attribution-ShareAlike license, unless stated otherwise. Cite this article:
Duck, duck, goose Facts for Kids. Kiddle Encyclopedia.