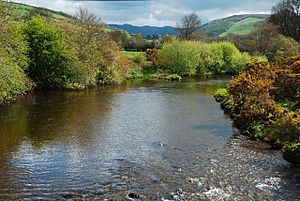 The Rheidol near Capel Bangor in spring

The Afon Rheidol is a river in Ceredigion, Wales, 19 miles (31 km) in length. The source is Plynlimon, the largest watershed in Wales with a catchment area covering 73 square miles (189 km2). Receiving an average annual rainfall of 40 inches (1015 mm) it is the source of both the Wye and the Severn. 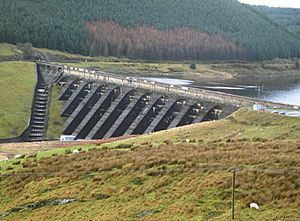 In the late 1960s, when the mine was closed, a major blowout of water contained in an adit coloured the whole river an ochre orange colour and greatly added to the concentrations of lead and zinc in the river. Today, management of water still draining from the mine is by the use of constructed wetlands. Previous management had included a limestone filter bed installed in the 1960s and now redundant. The filter bed is still in place and can be seen from the road.

The catchment of the Rheidol is dominated by the western maritime exposure of this part of Wales. Rainfall levels are high and ecosystems reflect both high rainfall and the acidic nature of the underlying rocks. Combined with the acid mine drainage from abandoned silver and lead mines that sit within the catchment (the area around Aberystwyth contains 38 of the 50 worst polluting metal mines in Wales), by 1991 the river had regularly broken EEC pollution limits for heavy metal contamination such as zinc.

Upland Molinia spp. grassland is common growing on deep deposits of peat. Within the valleys, dense and ancient oak forests with rich understoreys of ferns, mosses and lichens are common. In the valley bottom, glacial and alluvial deposits have been worked by man into low intensive agriculture.

For many centuries, the economy of the Rheidol valley had been metal mining: now replaced by forestry, tourism, farming beef and dairy cattle and sheep.

There are a number of tourist attractions in the Rheidol valley. These include the Devil's Bridge waterfalls where three bridges, each built over the previous, span the top of a most spectacular waterfall.

Between Devil's Bridge and Aberystwyth runs a narrow-gauge steam railway - the Vale of Rheidol Railway. This was originally built to ship metal ore from the mines but now provides a very popular tourist route into the top end of the Rheidol valley.

A large stag shape on the valley wall is a scheduled ancient monument and is one of two stags hill figures in the United Kingdom, the other being at Mormond Hill in Scotland. But it is in fact a lead mining waste feature which merely resembles a stag and is not a true hill figure. The spoil from the Gelli mine was initially poured down the valley side to form the 'head and horns'. When the mine reopened at the turn of the 20th Century for zinc production, a tramway was built along the base of the original spoil and across. The dumping of spoil from this venture, created the body and legs.

All content from Kiddle encyclopedia articles (including the article images and facts) can be freely used under Attribution-ShareAlike license, unless stated otherwise. Cite this article:
Afon Rheidol Facts for Kids. Kiddle Encyclopedia.