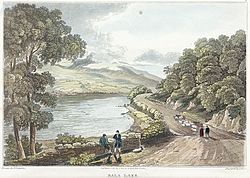 Bala Lake, (also known as Lake Bala) or Llyn Tegid (in Welsh;) is a lake in Gwynedd, Wales. The name Tegid may be related to Welsh teg, meaning "fair". It was the largest natural body of water in Wales before its level was raised by Thomas Telford to help support the flow of the Ellesmere Canal. It is 3.7 miles (6.0 km) long by 0.5 miles (0.8 km) wide. The River Dee runs through it and the waters of the lake are deep and clear. The town of Bala sits at its north-eastern end and the narrow gauge Bala Lake Railway runs for 3 miles (4.8 km) along the lake's south-eastern shore, and continues south-westward to the village of Llanuwchllyn (whose name means "church ['llan'] above ['uwch'] the lake ['llyn']").

The lake lies in a glacial valley which follows the Bala to Tal-y-Llyn fault line. The valley was blocked by a terminal moraine in the area of the village of Bala, thus forming the lake, which has fairly straight and parallel sides.

George Borrow wrote of the lake in Wild Wales in 1856, "The lake has certainly not its name, which signifies 'Lake of Beauty', for nothing". In English the lake is sometimes named after the nearby town of Bala, whose name means "outlet of a lake" in Welsh. An older, now unused, English name for the lake is Pemble Mere or Pimble Mere (of which many variant spellings are recorded). The twelfth century traveller, Giraldus Cambrensis mentions it as Penmelesmere which translator Sir Richard Colt Hoare writing in 1806 records in a footnote also in the form Pymplwy meer or the 'meer of five parishes adjoining the lake'. Hoare goes on to say that it is, in modern days, better known by the name of Bala Pool.

Llyn Tegid has abundant pike, perch, brown trout, roach, eel. It also contains the gwyniad, a fish unique to the locality and listed as critically endangered by the IUCN due to the introduction of the invasive and non native ruffe; and the very rare mollusc Myxas glutinosa (the glutinous snail). According to legend, whilst the Dee itself flows through the lake, the waters never mix. However this was not confirmed by the detailed limnological work undertaken from the 1990s, to understand and manage the occurrence of algal blooms on the lake.

In the 1990s the lake suffered from blooms of blue-green algae which indicated a significant and worrying eutrophication of the lake. Investigation by the Environment Agency in partnership with the water industry, the farming community and others has put in place a plan for reducing pollution inputs to the lake.

The lake forms part of the River Dee regulation system and the level at its outflow is automatically controlled. Depending on flow conditions and the level of water in Llyn Celyn, water can flow either into or out of the lake at the normal outflow point. Controls on the level of water in the lake were first constructed around 1840. Sluices designed and built by Thomas Telford and William Jessop were installed to ensure that the newly constructed Ellesmere Canal had a constant and sufficient supply of water. In the 1950s, these sluices were removed when the Dee and Clwyd River Authority constructed a new outlet channel and sluices to better control flooding of the upper Dee caused by uncontrolled releases of water from the lake. The operation of these sluices enables the lake to operate as water storage or water capacitance in the Dee system and thus allow water to be abstracted at Huntingdon near Chester, England in order to supply fresh water to the Wirral, England.

In the legend of the History of Taliesin, the character Tegid Foel ("Bald Tegid") was the husband of the goddess or witch Ceridwen. The place where his court stood is now beneath the waters of the lake. According to folk tradition, the court was drowned one night. It is said that the light of the court and the little town around it can be seen on a moonlit night. 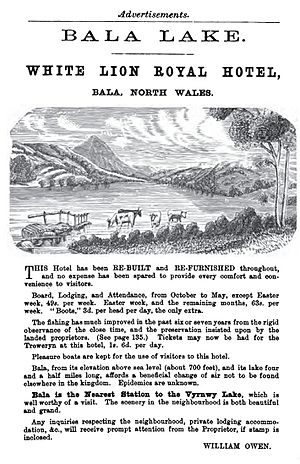 Bala has two sailing clubs, and a number of companies provide kayaks, yachts and various other types of boats for hire.

All content from Kiddle encyclopedia articles (including the article images and facts) can be freely used under Attribution-ShareAlike license, unless stated otherwise. Cite this article:
Bala Lake Facts for Kids. Kiddle Encyclopedia.