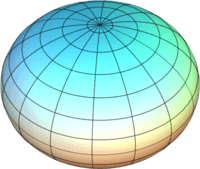 The geoid is a shape like the surface of the Earth. It is a 3-D geometrical shape like an orange. Shapes of this kind are called oblate spheroids, which is a kind of ellipsoid.

The geoid, however, is a very special kind of oblate spheroid. It is defined as follows:

The geoid is the shape that the surface of the oceans would take under the influence of Earth's gravitation and rotation alone, in the absence of other influences such as winds and tides.

It was defined by Gauss, in 1828. It is often described as the true physical shape of the Earth. The study of Earth's measurements and shapes is called geodesy.

For many practical purposes, a simpler shape is used because that makes calculations easier. That shape is called a reference ellipsoid. In basic education, the shape of the Earth is described as being like an orange, a sphere but wider round the equator. This shape is produced by all celestial spinning spheres, such as stars and planets. The details differ somewhat in each individual case.

All content from Kiddle encyclopedia articles (including the article images and facts) can be freely used under Attribution-ShareAlike license, unless stated otherwise. Cite this article:
Geoid Facts for Kids. Kiddle Encyclopedia.