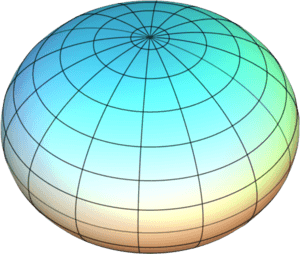 Diagram of an oblate spheroid

Oblate spheroids have rotational symmetry around an axis from pole to pole.

Many planets, including the Earth and Saturn, are oblate spheroids. The difference between a sphere and the Earth's shape is small, only about one part in 300.

Stars spin, and some spin very fast. The faster the spin, the flatter the oblate spheroid. The Sun rotates at 2 km per second, neutron stars have speeds of thousands of km/sec.

In 1687 Isaac Newton published the Principia. He included a proof that a rotating self-gravitating fluid body in equilibrium takes the form of an oblate ellipsoid of revolution (a spheroid). The amount of flattening depends on the density and the balance of gravitational force and centrifugal force.

In other words, the Earth is a spheroid because it rotates. Gas giants like Jupiter and Saturn are flattened by rotation more than the Earth.

All content from Kiddle encyclopedia articles (including the article images and facts) can be freely used under Attribution-ShareAlike license, unless stated otherwise. Cite this article:
Oblate spheroid Facts for Kids. Kiddle Encyclopedia.