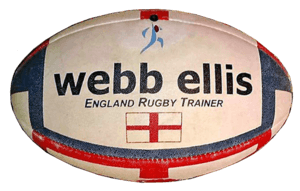 A rugby ball is an elongated ellipsoidal ball used in rugby football. Its measurements and weight are specified by World Rugby and the Rugby League International Federation, the governing bodies for both codes, rugby union and rugby league respectively.

The rugby ball has an oval shape, four panels and a weight of about 400 grams. It is often confused with some balls of similar dimensions used in American, Canadian and Australian football. 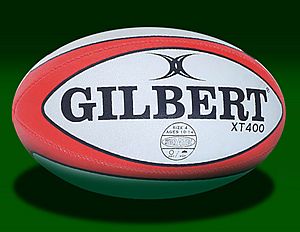 A Gilbert rugby football as used in rugby union

In 1980, traditional leather-encased balls, which were prone to water-logging, were replaced with balls encased in synthetic waterproof materials. The Gilbert Synergie was the match ball of the 2007 Rugby World Cup.

Most of the professional leagues use Adidas, Gilbert, Mitre or Webb Ellis manufactured balls. 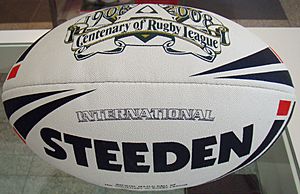 A Steeden football as used in rugby league

Rugby league is played with a prolate spheroid shaped football which is inflated with nitrogen. A referee will stop play immediately if the ball does not meet the requirements of size and shape. Traditionally made of brown leather, modern footballs are synthetic and manufactured in a variety of colours and patterns. Senior competitions should use light coloured balls to allow spectators to see the ball more easily. The football used in rugby league is known as "international size" or "size 5" and is approximately 27 cm (11 in) long and 60 cm (24 in) in circumference at its widest point. Smaller-sized balls are used for junior versions of the game, such as "Mini" and "Mod". A full size ball weighs between 383 and 440 g (13.5 and 15.5 oz). Rugby league footballs are slightly more pointed than rugby union footballs and larger than American footballs.

Both the Australian National Rugby League and the Super League use balls made by Steeden. Steeden is also sometimes used as a noun to describe the ball itself.

All content from Kiddle encyclopedia articles (including the article images and facts) can be freely used under Attribution-ShareAlike license, unless stated otherwise. Cite this article:
Rugby ball Facts for Kids. Kiddle Encyclopedia.