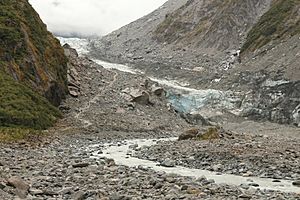 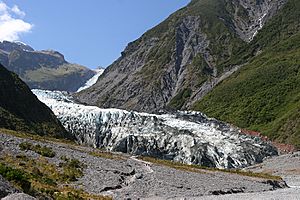 View of the glacier from the valley below. 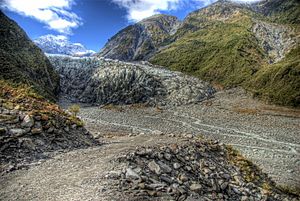 The glacier reaching the rainforest in 2007.

Fox Glacier / Te Moeka o Tuawe is a 13-kilometre-long (8.1 mi) temperate maritime glacier located in Westland Tai Poutini National Park on the West Coast of New Zealand's South Island. It was named in 1872 after a visit by then Prime Minister of New Zealand Sir William Fox. Following the passage of the Ngai Tahu Claims Settlement Act 1998, the name of the glacier was officially altered to Fox Glacier / Te Moeka o Tuawe.

Fed by four alpine glaciers, Fox Glacier falls 2,600 m (8,500 ft) on its 13 km journey from the Southern Alps down to the coast, with it having the distinction of being one of the few glaciers to end among lush rainforest only 300 metres (980 ft) above sea level. Although retreating throughout most of the last 100 years, it was advancing between 1985 and 2009. In 2006 the average rate of advance was about a metre a week. In January 2009, the terminal face of the glacier was still advancing and had vertical or overhanging faces which were continually collapsing. Since then there has been a significant retreat, with the 2009 high level clearly visible as vegetation line on the southern slope above what is left of the lower glacier today.

The outflow of the glacier forms the Fox River. During the last ice age, its ice reached beyond the present coastline, and the glacier left behind many moraines during its retreat. Lake Matheson formed as a kettle lake within one of these.

Lower part of Fox Glacier with glacier mouth, February 2013. Note the clearly visible limit of vegetation on the right (southern) slope, which marks the temporary maximum height of the glacier around 2009.

Like nearby Franz Josef Glacier, it is one of the most accessible glaciers in the world, with its terminal face an easy walk from Fox Glacier village/Weheka. It is a major tourist attraction and about 1000 people daily visit it during high tourist season. Though people are told not to, some go beyond the barriers and climb without guides onto the glacier, whose rapid advance creates dangers of sudden ice and rockfalls.

Fox Glacier township/Weheka, 6 km away from the glacier, functions mainly as a service centre for tourists, though it also services the local farming community, which had been its main focus until the 1990s (though tourism started as early as the late 1920s). The approximate township site had been gazetted as early as 1866. Bruce Bay is 46 km to the south-west of the township, and Franz Josef is 23 km north-east. State Highway 6 runs through the town.

The town is served by the Fox Glacier Aerodrome.

Accidents on the Glacier

Two Australian tourists, Ashish Miranda and Akshay Miranda, were killed on 8 January 2009 when more than 100 tonnes of ice fell on them. They were not part of a guided group and had crossed safety barriers and walked approximately 500 metres to the terminal face to take photos.

On 21 November 2015, seven people were killed when a Eurocopter Écureuil (squirrel) helicopter on a scenic flight crashed on the glacier. The helicopter was operated by Alpine Adventures.

All content from Kiddle encyclopedia articles (including the article images and facts) can be freely used under Attribution-ShareAlike license, unless stated otherwise. Cite this article:
Fox Glacier Facts for Kids. Kiddle Encyclopedia.