Bait is any substance used to attract prey, e.g. in a mousetrap. 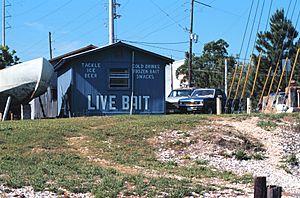 The term is especially used with regard to catching fish. Traditionally, nightcrawlers, insects, and smaller fish have been used for this purpose. Fishermen have also begun using plastic bait and, more recently, electronic lures, to attract fish. Because of the risk of transmitting Myxobolus cerebralis (whirling disease), trout and salmon should not be used as bait. There are various types of saltwater baits that are natural. Studies show that natural baits like croaker and shrimp are more recognized by the fish and are more readily accepted. The best bait for Red Drum (Red Fish) is the pogie or menhaden and in the fall specks like croakers thrown in marshy areas.

Using bait is also a common practice in leopard hunting on a safari. A dead, smaller sized antelope is usually placed high in the tree to lure the otherwise overcautious leopard. The hunter either watches the bait from a shootable distance or stalks the animal if it came for the bait during the night.

Bait is also used in bear hunting. In areas where bears are hunted, one can often find such bait for sale at gas stations and hunting supply stores. The bait often consists of some sweet substance, often frosting or molasses, combined with some aromatic such as rotten meat or fish. The bait is spread and the hunter waits under cover for his prey.

Baiting in Australia refers to specific campaigns to control foxes, wild dogs and dingos by poisoning in areas where they are a problem. These programs are held in conjunction with the local Department of Primary Industriey, Rural Lands Protection Board (RLPB) and National Parks and Wildlife Service (NPWS) to facilitate a neighbourhood baiting campaign.

All content from Kiddle encyclopedia articles (including the article images and facts) can be freely used under Attribution-ShareAlike license, unless stated otherwise. Cite this article:
Bait Facts for Kids. Kiddle Encyclopedia.