Millerton is a small settlement in the northwestern South Island of New Zealand in the West Coast region. It is in the Papahaua Ranges, around 25 kilometres north east of Westport, on SH67 from Westport to Karamea.

The history of Millerton bears some resemblance to that of Denniston, being a town that lived from and for the coal that was mined in the Ranges. Millerton has a population of approx 30-40. It was classified like Denniston as a ghost town in the 1970s but has had a resident population for several decades. It is possibly New Zealand's only populated hilltop township. 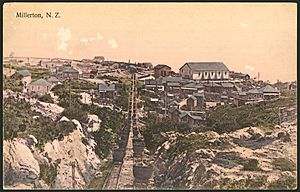 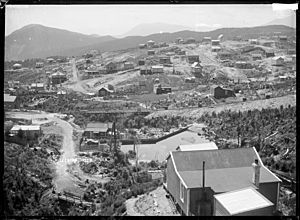 Despite its elevation of 260 metres being considerably lower than that of Denniston (600 metres), the steep grade between the coastline and Millerton still meant that the coal was difficult to get down from the hilltop to the coastal railway near sea level. The Westport Coal Company built the Millerton Incline in 1891 and the Millerton Mine began production in 1896. Mining at Millerton ended in the late 1960s, as it largely did at Denniston.

Further images of Millerton, its ropeways and incline, can be accessed via the 'External links' below.

The Hon. William McIntyre from Millerton was a member of the Legislative Council from 1921 until he died in 1949, and was known as the Father of the Upper House. A miner from Scotland, he (with his brother) set a record for the coal mined in one shift at the Millerton Mine.

With the Denniston and the smaller Millerton mining operations having ended, the nearby Stockton coalfield is continuing the tradition of West Coast coal. Solid Energy New Zealand has planned to extend the life of the Stockton mining area by opening up the old Millerton Mine workings, albeit as an open cast pit.

The Millerton football (soccer) club, known as the Millerton All Blacks, were twice runners-up in the Chatham Cup, New Zealand's knockout football competition, in 1932 and 1933.

Millerton had its own Lodge of the Royal Antediluvian Order of Buffaloes (Lookout Lodge No 127 of the R.A.O.B. NZ Constitution of the Grand Lodge of England). The Lodge was opened in 1950 and closed sometime in the mid-1980s.

Tourists often venture further up the West Coast north of Westport. Originally there was a narrow, steep and winding road to the township, but the steeper section of road has been closed and diverted, going directly to Stockton via 'The Grand Canyon'. Access is now off the new upper road section & is signposted, entering the township via the original road from the North-eastern end of the town. This 'old' road continues through the town and west towards the historic Millerton Incline, the Portal and Dam (part of an inclined rail system that took coal down to Granity). There are some spectacular views here across the rainforest to the coast and north towards the Karamea headland. The closed section of old road can be walked down as far as the Millerton 'Granity Creek' Bridge. Where there are a series of spectacular waterfalls to be viewed. There is parking at either end of this walking section. The local community offers maps and information at the local community hall (in the township). There are several short walks in and around Millerton with historic sites and scenic views. The Bathhouse walks are a hidden gem in this area, and the Bathhouses themselves are of historic value too. A creek formed the reservoir dam where the coal miners used to come and bathe after a long day mining, and remnants of the pipework which flowed with hot water heated by the mines still remains at the site. In the township area you can see the mine sites and also the incline brake head.

All content from Kiddle encyclopedia articles (including the article images and facts) can be freely used under Attribution-ShareAlike license, unless stated otherwise. Cite this article:
Millerton, New Zealand Facts for Kids. Kiddle Encyclopedia.