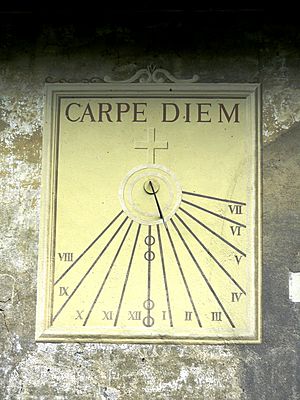 Carpe diem is a famous phrase from one of the poems of Horace. It means "seize the day" in Latin.

Especially during the Baroque era, the phrase was important. In the 17th century there was the Thirty Years' war, which lasted roughly from 1618 to 1648. For the people of the time, death was present almost everywhere. To compensate for that there were the concepts of Carpe diem (There is little time left, use it as best you can), Vanitas (Vanity; things are not what they seem), and Memento mori (Remember you will die).

The poem is originally from Odes 1.11. It is given in Latin and English below.

The poem in Latin and English

A better translation of the phrase would probably be pluck the day (as a fruit might be plucked from a tree).

All content from Kiddle encyclopedia articles (including the article images and facts) can be freely used under Attribution-ShareAlike license, unless stated otherwise. Cite this article:
Carpe diem Facts for Kids. Kiddle Encyclopedia.