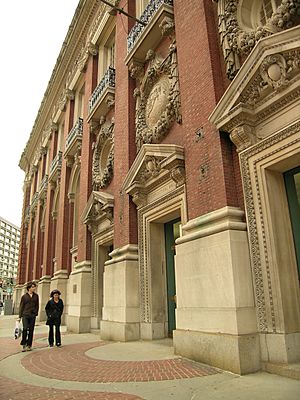 Horticultural Hall, at the corner of Huntington Avenue and Massachusetts Avenue in Boston, was built in 1901. It sits across the street from Symphony Hall. Since 1992, it has been owned by the Christian Science Church. It is the current home to the The William Morris Hunt Memorial Library of the Museum of Fine Arts as well as to offices of Boston Magazine and Small Army, and to a performance space of the New England Conservatory of Music.

The building was the third "Horticultural Hall" built for the Massachusetts Horticultural Society. It was designed in the English Renaissance revival style in 1901 by architects Wheelwright and Haven on land purchased by the Society. (This firm also designed the whimsical Harvard Lampoon Castle in Cambridge, Massachusetts.)

When the Hall was dedicated in 1901, thousands of members and visitors attended its ten-day opening, during which time the hall was filled with amaryllises, azaleas, Pelargonium geraniums, gloxinias, jasmine, trumpet lilies, palms, rhododendrons, wisteria, and a collection of 1,000 orchids, the finest collection gathered in America to that time.

The building's larger lecture hall could seat 300. It was home to many organizations including the Benevolent Fraternity Fruit and Flower Mission, the Wildflower Society, the Garden Club Federation (whose founding in 1927 was organized by the Society), the Boston Mycological Club, the New England Gourd Society, the New England Gladiolus Society, the Herb Society of America, and the Boston Aquarium Society. The building was renovated in 1984, and sold to the neighboring Christian Science Church in 1992.

The Massachusetts Horticultural Society has built and occupied a series of "Horticultural Halls" in Boston, including the first on School Street (1845), the second on Tremont Street (1865), and this third hall (1901).

The society's current home is the Elm Bank Horticulture Center, located on the town lines of Wellesley and Dover (2001).

All content from Kiddle encyclopedia articles (including the article images and facts) can be freely used under Attribution-ShareAlike license, unless stated otherwise. Cite this article:
Horticultural Hall (Boston) Facts for Kids. Kiddle Encyclopedia.