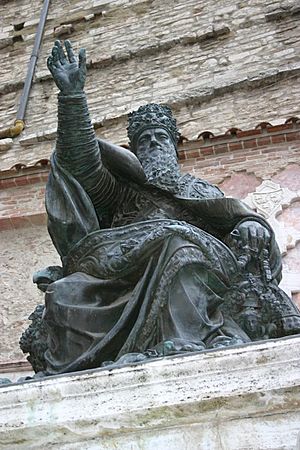 Giovanni Maria Ciocchi del Monte was born in Rome in 1487.

Pope Paul III made Ciocchi del Monte a Cardinal in 1536. He became Cardinal-Bishop of Palestrina in 1543.

He participated in the Council of Trent.

Pope Julius was involved in Italian and European political disputes.

All content from Kiddle encyclopedia articles (including the article images and facts) can be freely used under Attribution-ShareAlike license, unless stated otherwise. Cite this article:
Pope Julius III Facts for Kids. Kiddle Encyclopedia.