Guido Cavalcanti (1259 – August 1300) was an Italian poet from Florence. He was the best friend of Dante Alighieri as well as an influence on his thinking. Cavalcanti is one of the most important poet of Dolce stil novo, and he is widely regarded as the first major poet of Italian literature. 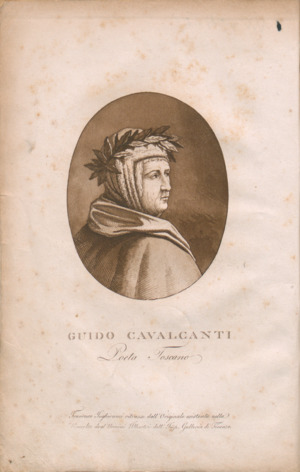 Cavalcanti was born into a noble Guelph family; his father was Cavalcante de Cavalcanti. In 1267 he got married to Bice, daughter of Farinata degli Uberti, leader of the Florentine Ghibellines. In 1284 he became a member of the general council, together with Brunetto Latini and Dino Compagni. On June 24 1300 he was exiled, so he went to Sarzana. On August 19 of the same year he could return in Florence, but he died after a few days, on August 29.

Guido Cavalcanti wrote sonnets and ballads. Only fifty two poems by the poet are known today. Hist best works are the canzone Donna mi prega (A lady asks me), the ballad I' prego voi che di dolor parlate (I ask you that speak about suffering) and the sonnet L’anima mia vilment’ è sbigotita (My soul is in distress).

All content from Kiddle encyclopedia articles (including the article images and facts) can be freely used under Attribution-ShareAlike license, unless stated otherwise. Cite this article:
Guido Cavalcanti Facts for Kids. Kiddle Encyclopedia.