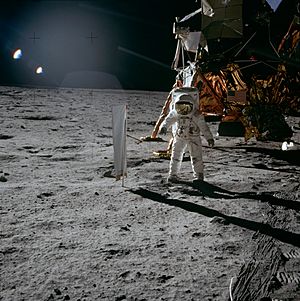 The Solar Wind Composition Experiment (SWC) was an experiment that took place on the Moon during the Apollo program (Apollo 11, 12, 14, 15 and 16). It was done to measure the solar wind outside of Earth's magnetosphere. It was the first notable measurement of isotopic solar material.

The experiment was suggested by by a Swiss team headed by Johannes Geiss of the University of Bern and Peter Eberhardt of the Swiss Institute of Technology. It was partially funded by the Swiss Government.

The SWC experiment was done by getting a aluminum sheet and facing it towards the sun. The foil was to collect the ion types and energies of the solar wind on the lunar surface. After the experiment, the sheet was placed into a Teflon bag, and sent back to Earth to be studied. The experiment was successful and found Helium, Neon and Argon isotopic compositions coming from the sun.

All content from Kiddle encyclopedia articles (including the article images and facts) can be freely used under Attribution-ShareAlike license, unless stated otherwise. Cite this article:
Solar Wind Composition Experiment Facts for Kids. Kiddle Encyclopedia.