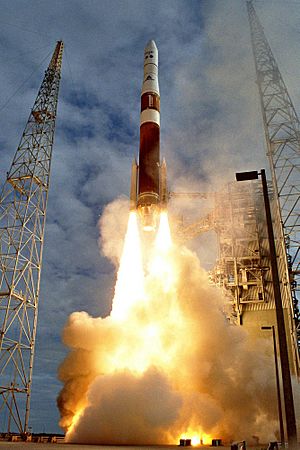 The Delta IV Medium+ (4,2) with the GOES-N satellite, lifts off from Cape Canaveral Air Force Station in Florida.

The Delta IV has launched 32 times. The first flight was on November 20, 2002, and it launched the Eutelsat W5 communications satellite into geostationary transfer orbit (GTO).

The Delta IV rocket comes in many different types meant to launch different sizes and kinds of satellites. 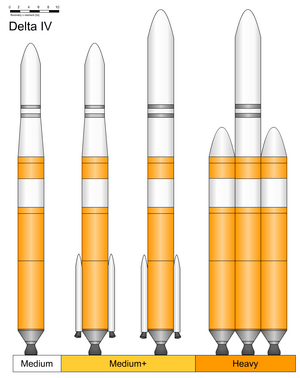 The least powerful kind of the Delta IV rocket is the Medium type. It has 1 main Common Booster Core (CBC) as the first stage of the rocket, using the RS-68 engine, and the second stage is like from the Delta III rocket, but it has been changed. It uses a 4-meter payload fairing to cover the satellite during the launch of the rocket. This kind has launched 3 times. 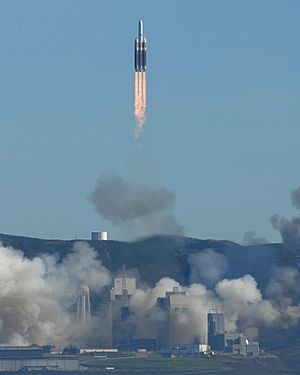 The Delta IV Heavy with NROL-49, a top secret spy satellite, lifting off from Vandenberg Air Force Base in California.

The Delta IV Medium+ (4,2) is like the Medium type, but it has two GEM-60 solid rocket boosters strapped onto the CBC. This kind has launched 13 times, and is the kind of Delta IV rocket that has launched the most times.

The Delta IV Medium+ (5,2) is like the (4,2), but the second stage and fairing has a larger diameter. This kind has launched 2 times.

All content from Kiddle encyclopedia articles (including the article images and facts) can be freely used under Attribution-ShareAlike license, unless stated otherwise. Cite this article:
Delta IV Facts for Kids. Kiddle Encyclopedia.