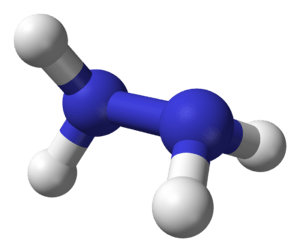 Hydrazine, also known as diazine, is a chemical compound. It is composed of nitrogen and hydrogen ions. Its chemical formula is N2H4. It contains hydrogen in its +1 and nitrogen in its -2 oxidation state.

It is a colorless liquid. It smells like ammonia, but it is more reactive than ammonia. It is a strong reducing agent. It is explosive. It can mix with water. It is a base similar to ammonia.

All content from Kiddle encyclopedia articles (including the article images and facts) can be freely used under Attribution-ShareAlike license, unless stated otherwise. Cite this article:
Hydrazine Facts for Kids. Kiddle Encyclopedia.