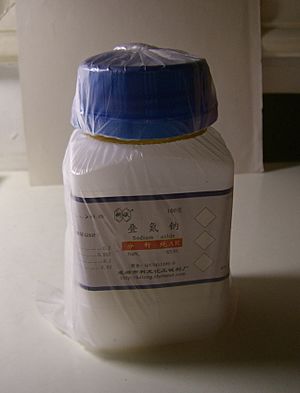 Sodium azide, also known as sodium trinitride, is a chemical compound. Its chemical formula is NaN3. it will go bang if there is water inside an air bag

It is a white crystalline solid. It is an explosive. It can be detonated by an electric spark. It contains sodium and azide ions. It reacts with acids to produce hydrazoic acid. It can be destroyed by reacting it with nitrous acid. This reaction produces nitric oxide, nitrogen, and sodium hydroxide. It is a powerful reducing agent, which makes it explosive. It contains nitrogen in its -1/3 oxidation state.

It is used in airbags. It makes the airbags puff out. A computer detects that the car is crashing and ignites the sodium azide. This makes sodium metal and a lot of nitrogen gas. The nitrogen gas inflates the airbag. It can be used to make other explosives, such as lead azide.

Sodium azide is very toxic. It reacts with acids to make the explosive hydrazoic acid, which also is a very toxic gas. It is similar to cyanide poisoning. It attacks the respiratory system and the circulatory system.

All content from Kiddle encyclopedia articles (including the article images and facts) can be freely used under Attribution-ShareAlike license, unless stated otherwise. Cite this article:
Sodium azide Facts for Kids. Kiddle Encyclopedia.