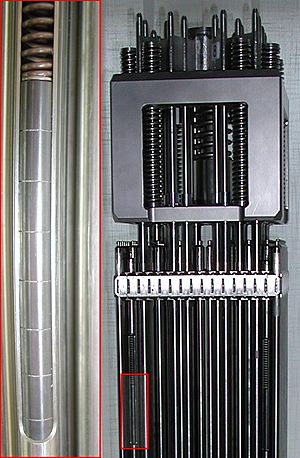 Nuclear fuel, the enlargement on the left shows the so called pellets. Original size of the module is about 4.5m in length.

One of the benefits of using MOX-type fuel is that the plutonium dioxide that is produced, can be re-used for energy generation. Certain types of nuclear power plants need plutonium to work properly.

All content from Kiddle encyclopedia articles (including the article images and facts) can be freely used under Attribution-ShareAlike license, unless stated otherwise. Cite this article:
MOX fuel Facts for Kids. Kiddle Encyclopedia.