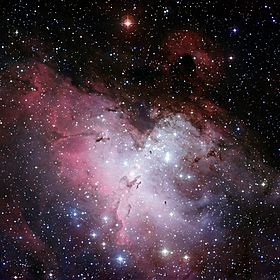 The "Pillars of Creation"

The Eagle nebula is a young open cluster of stars in the constellation Serpens.

The nebula is catalogued as Messier 16 (M16), and as NGC 6611. It is also called the Star Queen nebula and The Spire. These last names refer to visual impressions of the dark patch near the center of the nebula. This is called the "Pillars of Creation". It was photographed by the Hubble Space Telescope. The nebula contains several active star-forming gas and dust regions, including the Pillars of Creation.

All content from Kiddle encyclopedia articles (including the article images and facts) can be freely used under Attribution-ShareAlike license, unless stated otherwise. Cite this article:
Eagle nebula Facts for Kids. Kiddle Encyclopedia.